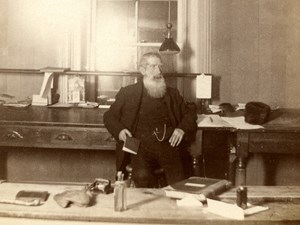 Ledgers are, in essence, hand-written books that keep track of financial obligations. They can come in many different forms, but they are mainly large, leather-bound books that would have constituted the important accounting records of a given company or individual involved in business or trade. Bookkeepers kept ledgers to record outgoing expenses and incoming revenue.

In many cases, ledgers recorded individual names of townspeople or local companies and what they bought from or sold to one another. At the AMBA, we have a number of ledgers across many of our fonds (collections). From a ledger kept by the Post Office in White Lake to the Gillies' Bros. Lumbering Company financial records, ledgers are preserved in our collections to tell us about the community of our past.

How to Read Ledgers

Most early ledgers are kept in what was called single-entry bookkeeping format. There were two books required for this: a book of original entry called a day book, which kept track of the chronological transactions by day, and a ledger where those transactions were then organized into individual accounts and added to a bigger financial picture.

Each account in a ledger had two columns: a debit ("Dr.") column and a credit ("Cr.") column. Cash on hand and cash received is entered in the debit side, and cash paid out is entered on the credit side. When an account was settled, it was underlined twice.

These are the initial basics of understanding a ledger. They can get more complicated and be hard to read and understand. You may need to look at a few of them to brush up on the writing style, and some bookkeepers' penmanship is better than others.

In 2019, as part of Library and Archives Canada's Documentary Heritage Communities Program, we received funding to digitize the ledgers in the McLachlin Bros. fonds (among many other items from the lumbering era, which you can check out here). 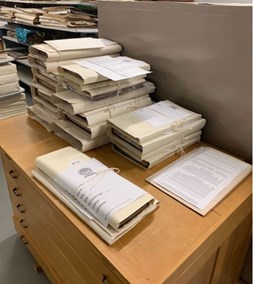 The ledgers are packaged, labeled and waiting for their trip to the digitization studio at Image Advantage in 2019.

The ledgers have now been available online for three years, but users have to trawl through pages and pages of them to find what they're looking for. Therefore, AMBA volunteer Doug Collins took on a project to index the names of people that appear in some of the business ledgers in the McLachlin Bros. fonds. He took note of employee names and the pages upon which their accounts were kept. Once the indexes were finished, we added them to the digitized ledgers so that they could be searchable from the main search page of our collection. This was finished and uploaded at the end of 2022.

This means that anyone who is researching one of their ancestors on our website can find out whether their ancestor worked for the McLachlin Bros. at the time the ledgers were kept. They can get as much information as how much tea the man drank during his winter season out at the shanty to as little as the amount that he was paid for his labour. This gives us a glimpse into the daily working life of these ancestors that we so frequently only see official records for.

Doug's indexes have already been used to find some interesting information. Descendants of the Murphy family were able to see that men from their family tree worked for McLachlin Bros. We also happen to have a wonderful photo taken by Charles Macnamara with members of the family at work: 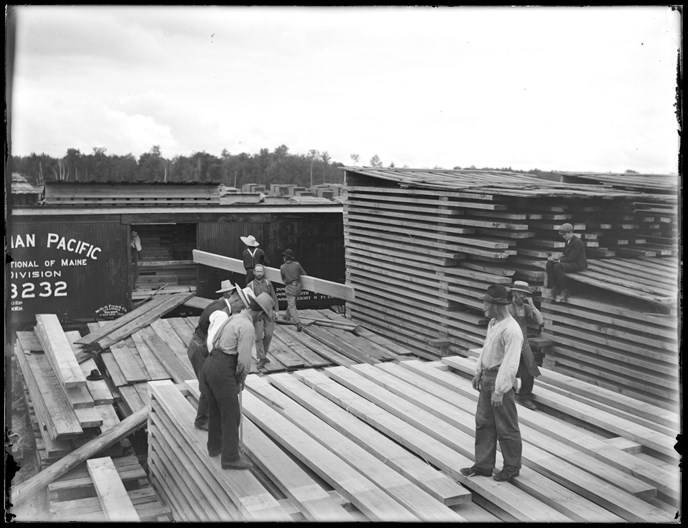 2002-0154 Charles Macnamara fonds. Loading Canadian Pacific freight cars at McLachlin Bros. lumber yard, Arnprior, Ontario. The man in the white shirt and hat has been identified as John Murphy, and the boy seated on the right as his son Ed Murphy by family members.

Searching the family name, they found the ledgers where "Murphy" appears in the index. From the index, They saw the page of the ledger their account is recorded on. It's important to note that the page mentioned in the index does not correspond to the pdf page number, but the page numbers on the actual ledger pages. Below, we're able to see what an earlier ancestor of the family, Matthew Murphy, was paid for his labour in 1868 as well as his purchases of household goods from the company. 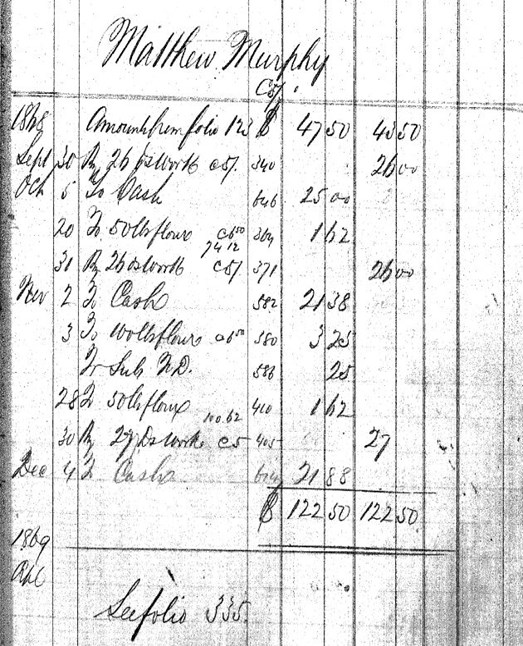 This process is far from complete, and far from perfect - only some of the ledgers survived through the years and found a home at the archives. We also have many more ledgers than we have indexes for. This will be an ongoing project that has had a wonderful start.

The ledgers for which an index has been made and uploaded are:

We are incredibly grateful to Doug Collins for his work on this project. The ability to search and find individuals within these ledgers is a great help to researchers looking into their own genealogy, the lumbering industry, business and economics history, and the social history of the community.

Now that you know a little more about them, try it yourself! You can browse all of the digitized ledgers here. As always, if you have any questions or comments, get in touch.

Title image is of the McLachlin Bros. Office, from 2002-0154 Charles Macnamara fonds.

Do not reproduce any images contained in this blog post without permission.

Home> Blog> All About Ledgers in the Archives