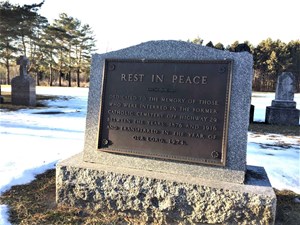 Kathleen wore her checkered dress with a lace collar when she appeared with her younger cousin Loretta in this Brennan family photograph (circa 1900). Kathleen Brennan was the daughter of Thomas Brennan (1856-1937) and his first wife Alice Mary Maher (1869-1899). 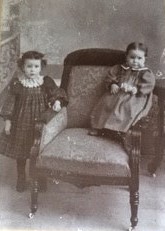 Thomas was a Butcher according to the Census of 1891. The family lived in an area just west of Arnprior known as Mansfield. Sadly, Kathleen died of goitre at the young age of 18, in July 1914. Kathleen’s obituary states that she was buried in the cemetery at Sand Point. 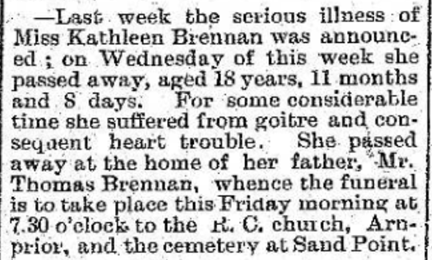 However, when I consulted the index for the St. Alexander’s Roman Catholic Cemetery at Sand Point, Kathleen Brennan’s name is not there. Family members may have wondered over the years why she did not appear on any of the gravestones in the cemetery.

When I reached out to Jeff Brennan of Arnprior, he told me that Thomas Brennan was a brother of his Great Grandfather James Brennan. He assumed Kathleen was buried in St. Alexander’s Cemetery. This is a logical assumption as 25 other members of the Brennan family are buried in the St. Alexander’s Cemetery, including Kathleen’s mother Alice. Her burial record proves otherwise.

Burial Record from the Drouin Records available on Ancestry

This hand written record obtained from Ancestry provides details about Kathleen Brennan’s death and subsequent burial. It states that she was interred in the “cemetery of this parish”; which at that time was the St. Celeste Cemetery. But her story does not end here.

When Ontario Hydro started building the Arnprior Generating Station in 1974, remains of those interred in the old St. Celeste Roman Catholic Cemetery had to be moved before the entire area became flooded as part of the new head pond.

I had many questions about what took place in 1974, so I asked Ted Strike for some background information. Ted is now a member of Town Council but back in 1975, he had just started working for the Town of Arnprior. Apparently, all identified remains and stones were moved from St. Celeste to the Malloch Road Cemetery by a local funeral director at Hydro’s expense beginning in 1974 and ending in 1975.

According to Ted, the unidentified remains from St. Celeste (ie. those without markers) were also moved and buried in Section J. On the Malloch Road Cemetery Plan, Section J is marked with numbers where names usually appear. These numbered plots refer to the unidentified remains which were moved from the old cemetery. What very few people realize is that 895 souls are represented by a single stone monument in the Malloch Road Cemetery, including Kathleen Brennan (1895-1914). 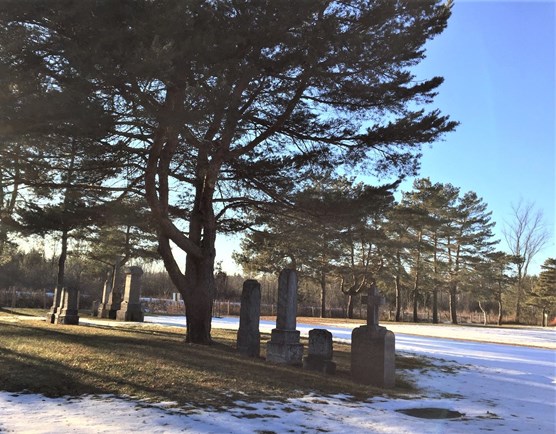 This photograph shows the start of Section J which includes the old grave markers from St. Celeste Cemetery and the large open area covered in snow. It was taken from the site of the Hydro Monument looking West. Presumably, other stones that pre-date 1916, which are scattered elsewhere throughout the Malloch Road Cemetery, were moved by various families between 1916 and 1974.

The monument is not easy to find. It stands alone between Section I and Section J; some distance from where most of the unidentified remains are interred. 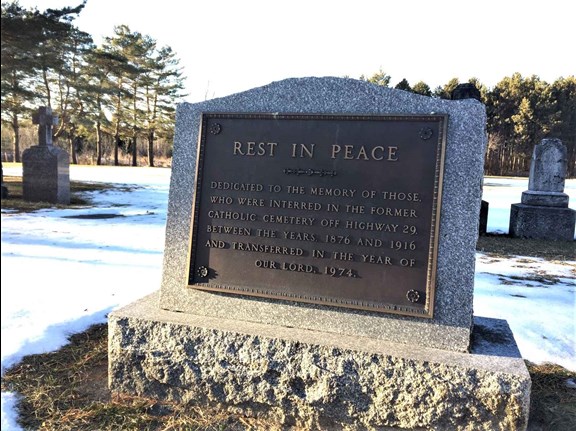 The cemetery referred to on the monument may more accurately be described as the St. Celeste Roman Catholic Cemetery located on Lot 27, Concession 2 of Fitzroy Township. It was closed in 1916 when the new cemetery was opened on Malloch Road (now 127 Usborne Street), on the outskirts of Arnprior.

For years, family history researchers have searched in vain for a complete cemetery list for St. Celeste.  A partial list was obtained by the Arnprior McNab/Braeside Archives (AMBA) from the Town of Arnprior in 2001, but it contained only 92 names followed by, “Numbers of Unknown – to 500”.

Last year, AMBA Volunteer Doug Collins decided to investigate this void in the records for the Archives benefit and his own curiosity. Over three months, he carefully compiled an Index to the Burials in St. Celeste Cemetery 1867-1916 from the parish records contained in the Drouin Collection available on Ancestry. 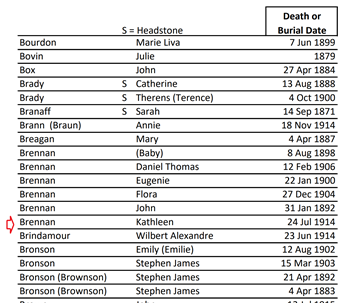 This was challenging work as many of the records are in French and the legibility of the script varies from priest to priest. While the majority of burials noted in the parish records took place at the St. Celeste Cemetery, other cemeteries are identified, eg. the Sand Point Cemetery, the Protestant Cemetery, etc. Those burials are not included in Doug’s index.

This valuable new finding aid will be a useful resource, especially for those who do not have an Ancestry membership. It lists, in alphabetical order, the individual’s surname followed by their Christian name and date of death or burial. It also notes ‘S’ where a cemetery stone exists for this person – separate from the Hydro monument.

I believe that the mystery surrounding the missing cemetery list can finally be explained. Until Doug took the time to extract the burial records from the other entries in the Parish records (baptism, marriage etc.), a list did not exist.

Thanks to Doug’s efforts, we can now easily confirm that Kathleen Brennan was buried in St. Celeste and her remains were moved to Section J in the Malloch Road Cemetery in 1974.

Thanks to Jeff Brennan, Norma McNaughton and Ted Strike for their assistance with this story.