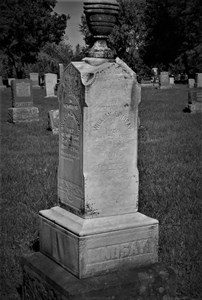 Several months ago, I came across a small, black and white photograph in the White Lake Women’s Institute records. It shows a boy leaning against the recessed entrance to a store, on a snowy day in 1881. It occurred to me that the lovely arched windows were very similar to those in the Baptist Church in White Lake. I decided to research the Lindsay family to find out more about this historic building and the part it played in the history of the Village.

William Lindsay Jr. (1806-1884) purchased a part of Lot 6 Concession 4 in White Lake from Allan McNab in 1854. William had emigrated as a boy from Wishaw, Lanarkshire, in Scotland, two hundred years ago. The family settled on the 9th line of Ramsay Township where his father William Sr. farmed and his mother Ann raised five sons and two daughters. William taught school in Ramsay and Beckwith, but for some reason he decided that his fortune lay in the Village of White Lake. He seized the opportunity to build a lumber mill, a lathe mill and a shingle mill with the help of his extended family. 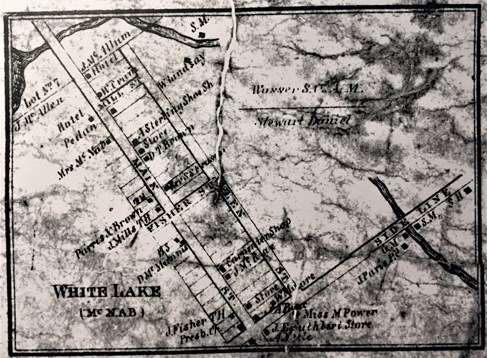 William enlisted the help of his brothers Alexander and Gavin, to transform local timber into sawn lumber. He purchased extensive timber limits and shanties around White Lake from lumberman David T. Browne. The Lindsay brothers successfully operated the mills until William died in 1884, at the age of 74. As his gravestone shows, he is buried with his parents in the Auld Kirk Cemetery on the 8th Line of Ramsay, in Lanark. 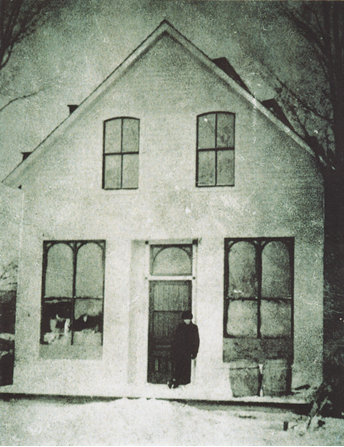 John Lindsay’s Mill Store was located between Browne’s Inn and Sterling’s Shoe Store. The boy standing in the doorway could have been one of the Lindsay children, circa 1881.

Digging into the White Lake land records, I was able to establish that it was William’s nephew John Alexander Lindsay who built the mill store on Lot 17 of Main Street. This store was used to sell the products of the mill and other general merchandise. Following William’s death, the mill and the store were sold to James R. Gillies and his brother John Gillies. They were mill owners in Pakenham; cousins of the better known ‘Gillies Bros. of Braeside’. The mill burned in 1898, shortly after the Gillies brothers sold it to John Box and William Slater. It was never rebuilt.

John Lindsay and his wife Ella (nee Cuthbert) remained in White Lake, where John decided to return to farming after the sale of the mill and store. Together, John and Ella raised a large family of 9 boys and 4 girls, including twins, Jean and Mabel. 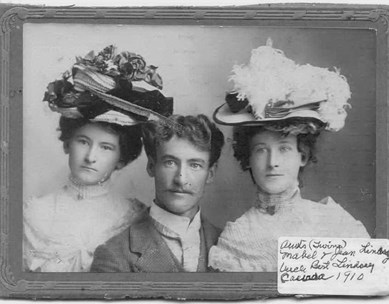 Some of the descendants of John and Ella remained in the area, while others moved away. Margaretta, ‘Retta’ Lindsay married Andrew Robertson, of Robertson’s Corners. Her brother James Evans Lindsay started his working life as a labourer in the Lindsay shingle mill. According to his obituary, published in 1934, he worked as a lumber agent for McLachlin Bros. of Arnprior, in Klock and Kippewa, for thirty years. The obituary also mentions that Gavin ‘Guy’ Lindsay was living in White Lake at that time. Their mother, Ella Lindsay also lived in the village until her death in 1934.

I returned to the land records to see what happened to the store once it passed out of the Gillies’ hands. The records show that Orangemen William Ellis, Robert Ring, Robert Goodfellow, Alexander McGregor, James Julian, James D. Ring and J. Towey purchased the building for $1.00, in 1908. 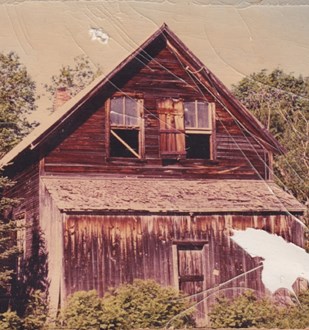 Robert Goodfellow was a farmer from Clay Bank. His sons William and James were both over the age of 16, so they would have qualified to be members of the Loyal Orange Lodge (LOL) at that time. The LOL No. 389 provided Irishmen in the area surrounding White Lake, a place to socialize, promote Protestantism, and pledge loyalty to the British monarch. It is very likely that LOL No. 389 was established long before Robert Goodfellow and the others purchased the former mill store in 1908. Records of the lodge are held privately by the organization, so it is not known where their earlier meetings were held.

Eastern Ontario and the Pontiac region in Quebec, had many well established lodges where Protestant farmers primarily of Irish descent supported the political and religious organization that started in Ulster, Northern Ireland, in 1795. The first lodge in Canada was organized by Ogle R. Gowan in Belleville, Ontario. Starting in the 1830’s, Orangeism spread quickly throughout Irish settlements north of Brockville towards the Ottawa River. Braeside LOL No. 169 opened its new hall in 1909 while Sand Point LOL No. 1393 had received its charter several years earlier. 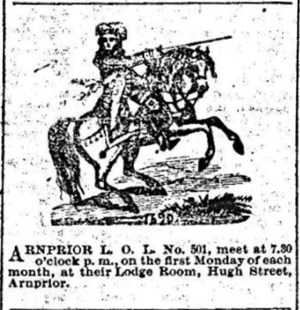 This LOL No. 501 notice shows ‘King Billy’ on a white horse which commemorates the victory of the Battle of the Boyne by Protestant King William of Orange over the Catholic King James II in 1690.

As with most lodges, the membership of LOL No. 389 (later LOL No. 2902) was probably somewhere between 20-40 men when it was established. The size and rectangular shape of the former mill store was ideal for the purposes of the lodge. Once the front porch was added to the front of the building, the men could safely utter the secret password to gain entrance by the ‘Tyler’ who guarded the entrance to the main room.

Because the Orange Hall was vacant most of the time, various groups in the village were given permission to use it for their meetings. It had a large garden where lawn socials were regularly held. The White Lake Women’s Institute held its first meeting there in June 1915. When the Baptist Church burned in 1924, the premises were offered to the congregation for regular Sunday services. Mrs. Charles Fraser, who has lived directly across from the former Orange Hall since 1960, told me that she remembers attending church services in the old hall. 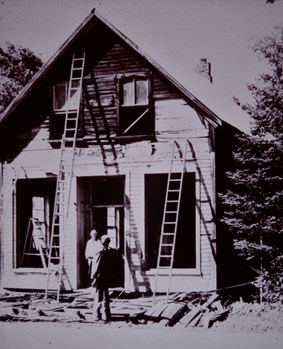 Demolition of the porch September 1978

In August 1969, members of the LOL executive decided it was time to sell the building. Presumably, after sixty years, there just weren’t enough members or new recruits to keep it going. It wasn’t until July 1978, when an enthusiastic young potter by the name of Douglas Bamford purchased the building, that the porch was finally removed. The local paper reported, “Mr. Bamford plans to retain all the old time features of the building. This will be another of the older buildings in the village which will be preserved for many more years”. Doug moved in and immediately began to transform the space into a comfortable living and studio space. 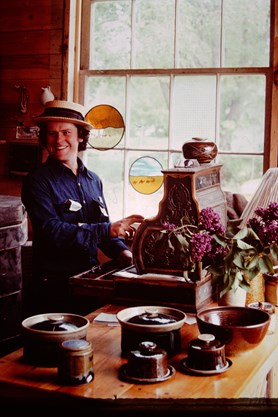 “I’ve since had several different studio spaces, but never one that I felt so comfortable and at home in.”

Doug sandblasted the interior walls and ceilings to reveal warm tones of the wood beneath layers of paint. He donated the wooden pews (most likely from the Baptist Church) to the Waba Cottage Museum and Gardens where they are now used in ‘The Temple’ building. Beautiful arched windows that were original to Lindsay’s storefront were revealed when the old porch was demolished. Doug must have felt that he had won the lottery! Now his pottery could be seen from the street, drawing customers into the studio which he named ‘High Fire Pottery’. 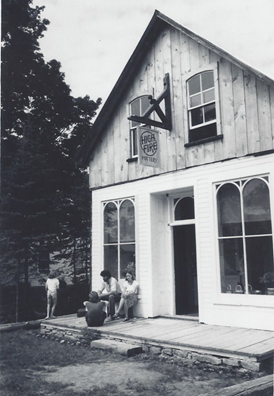 Friends at the opening of High Fire Pottery June 1982

With the help of some friends, Doug disassembled and moved an old log barn from a farm in McNab Township. It would house his kiln on the rear of the property. According to Doug, David Fraser would come over with his fork lift whenever a log was ready to be lifted up into place. Doug recalled that, “those were fun times…..[we had] no money, just lots of wonderful naïve energy surrounding us all the time." 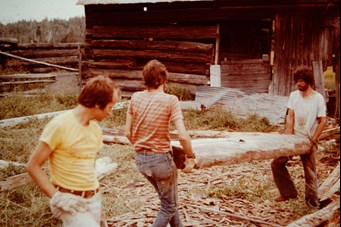 Moving logs to Doug’s property in White Lake, circa 1978.

When Doug moved to Nova Scotia to teach pottery, he sold his property. It eventually became a new retail space for the ‘Images Gallery’. 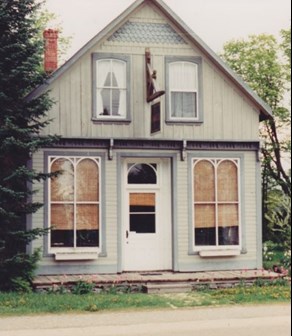 What was once a store, a hall, a studio, and a gallery is presently a home for a young family. The half-moon window in the kiln building and the bracket that held up the High Fire Pottery sign were salvaged by Doug from the old Canadian Pacific Railway station in Cobden. They are both still intact but the original windows have been replaced; hopefully they were saved by the owners at the time.

Doug wrote that “The restored general store is a jewel in the centre of that small village, and speaks to the pride townsfolk take in their built heritage and I am proud to have saved that old building.” 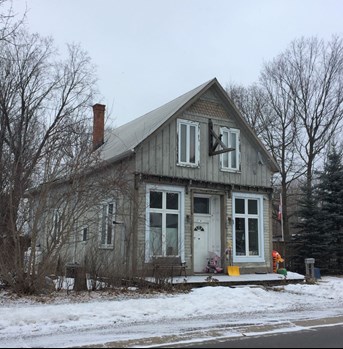 Despite the different owners and uses of the building over 140 years, it has retained the charm of the original mill store. And now, the AMBA has a more complete history to attach to the small photograph labelled Lindsay’s store, 1881.

Thank you to Doug Bamford, Mrs. Charles Fraser, John Fisher, Joanne Camelon and Donna Walsh for contributing to this story. For more information about the Baptist Church in White Lake, visit our Landmarks Map.