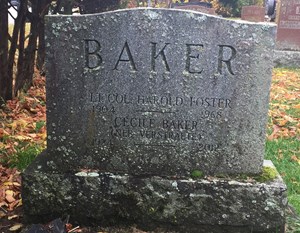 Harold Foster Baker began his military career in 1917, when he joined the cadets at the Arnprior High School. He had recently moved from his home in Casselman to live with his Baker relatives and would have enjoyed the friendship and camaraderie that the cadet corps provided.

After high school, Harold studied Arts at Queen’s University in Kingston from 1923-24. He also joined the Lanark and Renfrew Scottish Regiment, eventually receiving commissions of Lieutenant and Captain. He steadily advanced his knowledge throughout the years by attending courses in Ottawa and military training camps during the summers at Petawawa. When the Connaught Range opened in 1921, Harold was able to improve his marksmanship through its shooting programs. He returned to Kingston in 1936, to attend a course for Militia Staff at the Royal Military College; preparing the way for his future as a commanding officer. 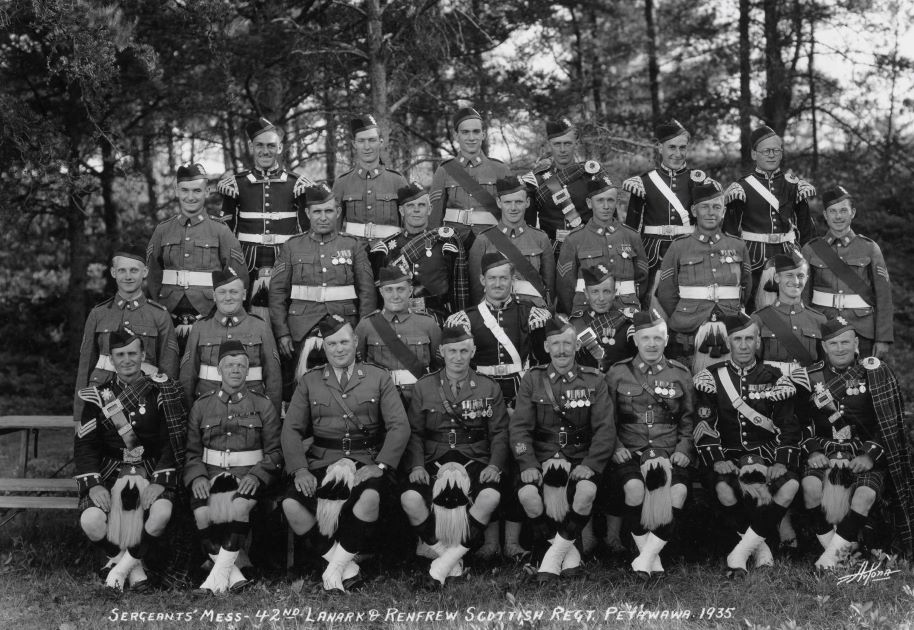 Harold Baker in 1935 in Petawawa  (front row, third from left) wearing the dark blue and green kilt of the Lanark and Renfrew Scottish Regiment. He received his first commission with the regiment in 1928. Photograph by Artona Studio.

When he was not actively participating in military training, Harold worked at his father’s car dealership from 1924-1940. His large and capable hands were put to good use repairing car, truck and motorcycle motors for C. H. Baker & Sons. In his spare time he designed, built and raced speedboats and motorcycles. When war broke out, Harold’s mechanical expertise and military training combined to show him a clear path forward.

In June 1940, Harold enlisted with the Governor Generals Foot Guards and trained at Cartier Square in Ottawa throughout the summer. The battalion was converted to an armoured role in 1942 and became known as the 21st Canadian Armoured Regiment (C.A.R. G.G.F.G.). Shortly after arriving in England in September 1942, at the age of 37, Harold Baker had been promoted to Major and placed second in command under Major M. J. Scott. They spent the next year and a half in England training and preparing for action in Europe. 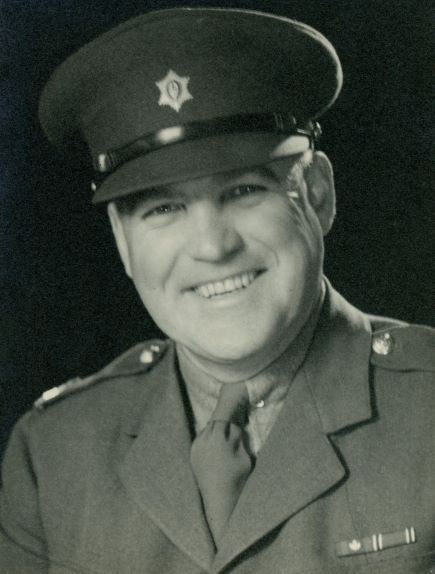 Major H. F. Baker photographed while stationed in England circa 1943.

On July 24th 1944, the first elements of the Regiment landed on Juneau Beach with the mission to defeat the German Army in Normandy.  During the Battle of the Falaise Gap in August 1944, the C.A.R. G.G.F.G. participated in ‘Operation Totalize’ where they suffered heavy casualties. When Lieut. Col. Scott was seriously wounded in the foot and had to be evacuated, Major H. F. Baker assumed command of the Regiment. Shortly after, while on a reconnaissance mission near the City of Trun, Major Baker was blown out of the turret of his tank about 8 miles inside German lines. He smashed his ribs, took bullets in his right arm and suffered chest injuries. Somehow, he managed to drag himself into the bush for cover and make his way back to his supply column where he received medical attention.

In recalling the incident in a letter to his father, he reported that he “went back to Bayeau by motor ambulance where they pulled the bullets out of me and sent me back to England”…“the real sad thing was that I lost all my good friends back there and after working with them for nearly five years, it was tough.” In January 1944, he was promoted to the rank of Lieutenant Colonel for his service during battle.

When he recovered, he was sent back to Europe. He landed at Dieppe and motored through France and Belgium. In the same letter to his father, while commanding the Army Fighting Vehicle Pool, he wrote that he was presently “mixed up in the motor game and liking it very well. Our job is the preparation and maintenance of fighting vehicles, and the delivery forward of them when they are required. Believe me it is just about as bad as being a General Motors Dealer.” He wanted to know how the deer hunt was going and said that he “used to think of you back there when I would be out in the pine woods with the snow on the ground.”

After the war ended, Harold remained in Holland where he was in charge of a railway terminal and the distribution of food, coal, gasoline etc. He oversaw the repatriation of Canadian artillery tanks and equipment as well as providing advice and support to soldiers returning home. Harold was also involved in arranging for the clearing of land mines along the North Sea. He ran his operation from a hotel in a small town called Oss, so he was soon fittingly known as “the Wizard of Oss”. 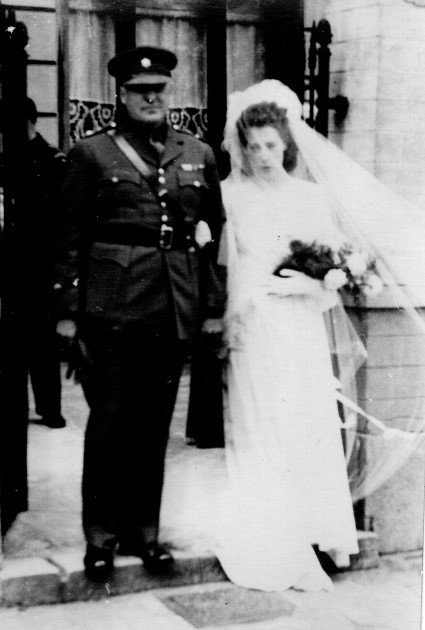 Harold was introduced by mutual friends to a young Belgian woman named Cecile Verstraete. According to their daughter Monique, her mother attended a college for women and liked to play tennis with her friends in the park next to her home. The poles holding the net disguised the radio antennae that allowed them to listen to Radio Belgique and hear news from England during the war. Neighbours gathered in the bunker at the back of Cecile’s great grandparent’s home at the sound of air raid sirens. They were married on June 22 1946 in Brussels, Belgium. The newlyweds sailed into Halifax in September 1946 where they were met by Harold’s brother Gilbert and his friend Tommy Charbonneau.

When they arrived in Arnprior, a celebration reception was held in their honour where Cecile met her new Baker and Foster families as well as Harold’s cherished, lifelong friends. Perhaps, on the long voyage to Canada, Harold told her how his father Charles Baker married his mother ‘Etta’ Foster, who was literally the girl next door. 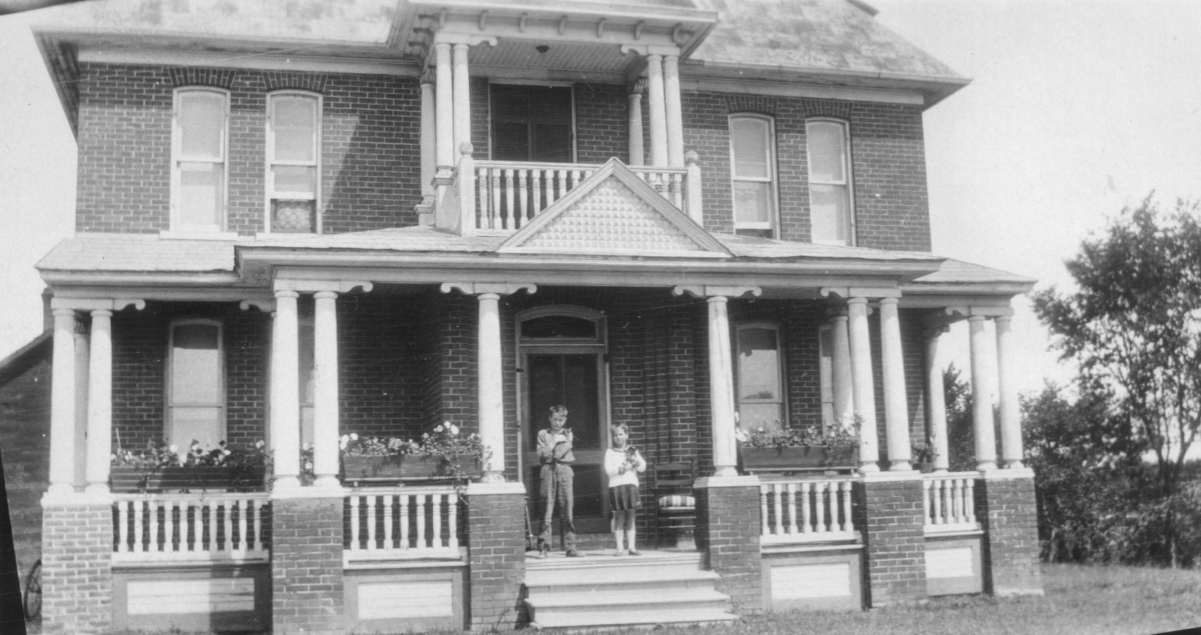 2014-0337 Gilbert Baker and Norma Robinson on the porch of the Baker house in Mansfield where the Dochart Brick, Tile and Terracotta Works was established in 1868. See the landmark on our local history map here.

Etta’s father, Henry Foster was a carpenter from nearby Ramsay Township in Lanark County. In 1889, he purchased property which backed onto the winding Dochart Creek on the south side of the River Road while William Baker carried on his brick manufacturing business on the north side. Etta married Charles in 1903 and moved to Casselman where Charles had established his own brick manufacturing business. Harold was the first born of their four sons: Harold Foster, William Thomas, Charles Edward and Gilbert Henry. When the brick business in Casselman burned down, Charles Baker opened his Ford Agency in Casselman in 1910. He moved to Arnprior in 1920 and opened his car dealership at 41 Tierney St.

Once Harold and Cecile were settled in Arnprior, Harold resumed work at his father’s car dealership. He became President of C. H. Baker and Sons Ltd. where they sold and serviced GM, Chevrolet and Oldsmobile products. They purchased the old McKay Planing Mill property at the corner of Daniel and William Streets in 1947. Harold’s brother Charles also worked in the family firm which incorporated in 1950.

Cecile’s outgoing nature helped her to quickly make new friends in Arnprior. She shared a particular bond with another war bride, Lillian Brittle, with whom she spoke French. Later, Mrs. Baker taught French at Walter Zadow Public School. Together, they raised their children Monique and John, who as a teenager worked at the family dealership. 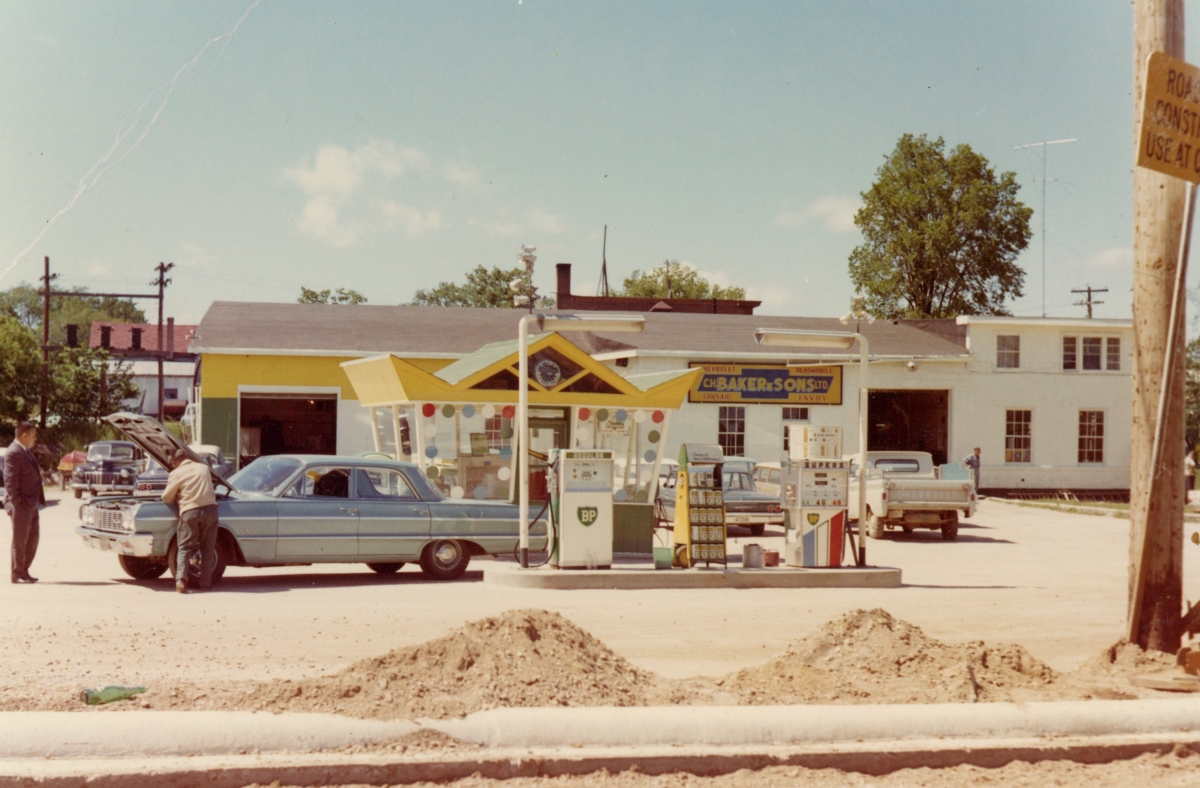 Harold was active in the community. He was one of the founders of the badminton and tennis clubs in Arnprior, and organized the popular power boat Regattas which were sponsored by the Chamber of Commerce. Perhaps his most important role, was as Chairman of the Civil Defence Committee where he used his military experience to guide its development for the Town in the post-war period.

After the fire on Daniel Street, he moved his business to the corner of Madawaska and Bridge Streets near the new development of war-time houses which stood on the former McLachlin Bros. property. At that time, all traffic travelling west from Ottawa passed by his gas pumps. His new showroom featured tall picture windows, where the latest cars in the pastel colours of the late 1960’s, could be seen from the street. After significantly expanding the premises, this business tragically burned down in 1968. Not long after, Lt. Col Harold Baker passed away on Dec 15 1968 at the age of 64. He is one of the many people who served our country and whom we celebrate on Remembrance Day each November.

Thanks to Monique Baker-Wishart and Nancy Dougherty for contributing photographs and information about the Baker family for this blog.