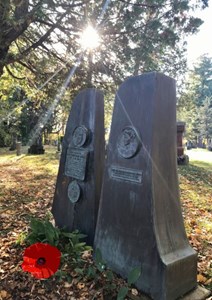 One of the most unique grave markers that I have ever seen is located in the Albert Street Cemetery in Arnprior. Constructed of two metal pieces riveted together in the shape of twin airplane wings, it sits quietly at the edge of the cemetery overlooking the Ottawa River. The piece was commissioned by Mrs. Corrine Audrey Greene (Bedore) to honour her late husband John James “Joe” Greene. It seemed appropriate to feature the life of this remarkable man for this Remembrance Day post of ‘Graveside Stories’.

Joe Greene was the son of Richard Leslie Greene, who served as a Lieutenant in the 3rd Canadian Tunnelling Company of the Canadian Military Engineers during World War I. Joe’s mother Andree (née Champagnol) raised Joe and his sister Jacqueline in her native tongue of Français in their Toronto home. 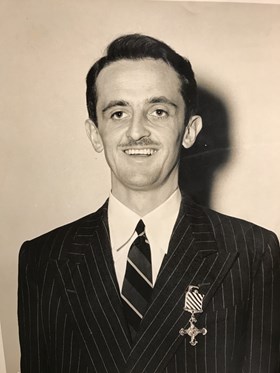 Joe Greene served in WWII as a Navigator/Observer in the Royal Canadian Air Force where he was recognized in Dispatches and awarded a Distinguished Flying Cross for bravery. Joe trained in Saskatchewan and Quebec before being stationed in England where he rose to the rank of Flight Lieutenant in the RCAF. His distinction was a credit to his parents and a sign of things to come.

After the war, Joe enrolled in the Bachelor of Arts program at the University of Toronto under the Department of Veteran’s Affairs program for returning servicemen. While there, he played hockey for University College and wrote a letter to ‘The Varsity’ editor in 1947 offering advice on how to improve the football program, starting with hiring a Canadian coach!

It is not clear why Joe chose to study law, but it was possibly due to the influence of his good friend Ed Houston, who also studied law in Toronto after the war. Houston invited Joe to come to Arnprior to work during the summer and introduced him to Corrine Bedore. She was studying Politics and Economics at Queen’s University at the time. 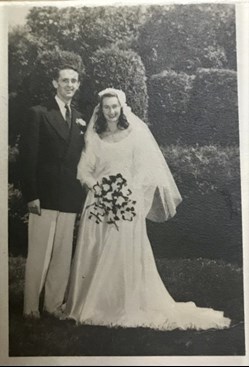 Corinne, known affectionately as “Queenie”, was the youngest child of Delorme and Catherine Bedore. Intelligent, outgoing and interested in sports, the two had much in common. Following her marriage in September 1948, Corrine transferred to the University of Toronto to complete her degree. In a profile piece printed in 1968, she set the record straight; “It wasn’t exciting…it was a lot of hard work. I always say that I had my first child and my BA by the time I was 21.” After Joe graduated from Osgoode law school in 1950, the Greene family moved to Arnprior, where Joe established a civil and criminal law practice with Con Mulvihill

It didn’t take Joe long to become heavily involved in local politics and various community groups such as the Chamber of Commerce, the Lions Club and the Arnprior Golf Club. His friend and later campaign manager Bill Burt reflected that, “J.J. became a regular on his Legion Curling Team, easily identified by his long scarf that almost extended to the ice level. It was always a jolly time to have popular J.J. in your company”.  As Deputy-Reeve of Arnprior, Joe introduced a Bylaw for the creation of the Town Crest award in 1957. He was Chair of the Legion committee established to raise funds and build the Cenotaph which now stands in front of the Arnprior Hospital.  Over the years, four more children were added to their family which now included Glen, Peter, Jocelyn, Stephanie and Virginia. 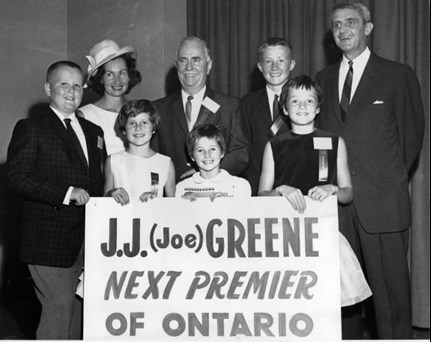 J. J. Greene spoke on behalf of Liberal Candidates at meetings throughout the province in the 1950s, culminating in a bid for the leadership of the Ontario Liberal Party in 1959. While not successful, he gained valuable experience during that campaign. Local support was strong for the affable and well-respected lawyer when he ran in 1963 as the federal Liberal candidate for Renfrew South against Conservative incumbent James Baskin. My mother remembers Joe Greene from this time period as a “real politician” and compared him to the late Paul Yakabuski (Conservative MPP 1963-1987) in terms of his leadership style and public speaking abilities.

On May 30 1963, The Arnprior Chronicle reported the new Member of Parliament’s first impressions of Parliament Hill, “We have been given horse and buggy tools in a jet age”. Joe felt that elected officials were ill equipped to serve, lacking in secretarial staff, basic equipment and facilities.

J. J. served as a Member of Parliament for only two years before Prime Minister Lester B. Pearson appointed him to his new cabinet as Minister of Agriculture in 1965. This was traditionally filled by a farmer and MP from a western province. When Pearson announced his decision not to run as Liberal leader in December of 1967, J.J. reached out to his team from Arnprior including Bill Burt and Jack Taylor. They had only two months to consolidate delegate support before the leadership convention in April 1968. When an Arnprior Guide reporter asked why he was running, J.J. replied “that it seemed the honourable thing to do”. 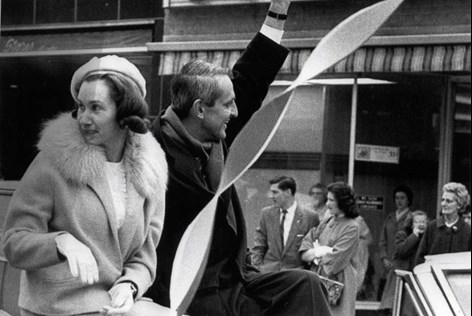 Queenie and J.J. Greene on the campaign trail.

During his leadership campaign, my friend Sheila Havey remembers her Grade 8 Music Class performing a song for Joe on Parliament Hill. Anticipating that they would dine in the Parliamentary restaurant after their performance, the teacher, Sister Donohue, had the boys practice pulling out chairs for the girls. It turned out that they ended up standing in the basement kitchen to eat, but it still was a memorable experience.

Time for You and Me

Time for Everyone to give a Helping Hand,

Lyrics to the song performed for Joe Greene on Parliament Hill, 1968

J.J.’s pragmatic approach contributed to his popularity at the leadership convention held at the Civic Centre in Ottawa. Greene felt that the country needed to improve productivity and keep investment from the United States to maintain our standard of living. He also wanted to decentralize the federal public service to bring the working of the federal government closer to the people. He remained on the ballot longer than expected, dropping off only after the third round and endorsing Pierre Elliott Trudeau on the fourth and final ballot. Observers at the convention were impressed by Greene. His speech to the delegates on the Friday evening was regarded by many veteran parliamentarians as one of the finest in Canadian history. Prime Minister Trudeau appointed Greene to his cabinet as Minister of Mines, Energy and Resources.

If you grew up in Arnprior, you will remember that during the October crisis in 1970, a tank and armed soldiers were stationed in front of the Greene’s home on John Street to protect the family of the Cabinet Minister. During this time Joe was in poor health. He decided to retire from the cabinet in December of 1971. Prime Minister Trudeau immediately appointed him to the Canadian Senate where he served until his death in October 1978.

Bill Burt wrote that “He worked extremely hard, played harder and refused to delegate much of the routine matters. His ambition exceeded his physical capabilities. My life has been strengthened by having Joe as a friend and teammate on many occasions.”

At his funeral, the Catholic Church opened its doors to the Anglican family to accommodate the massive crowd of political dignitaries and friends that came to pay their last respects to the Honourable J.J. Greene.

My thanks to contributors Sheila Havey, Stephanie Brown and Jocelyn DeLoache.

A brief history of Robert Simpson Park The Arnprior Cenotaph