The first Women’s Institute in the world was established in Stoney Creek, Ontario, in 1897 through the efforts of Adelaide Hoodless, Erland Lee and Janet Lee. This year, in 2022, the WI is celebrating its 125th anniversary.

The Institutes were established as “an organization for personal growth and community action... of rural women from farms, villages, and towns”, with the following objectives:

As such, they have often been described as “the rural woman’s university, a place for women to gather and learn about things that interest all of us”. The Women's Institutes contributed locally in many areas such as child welfare, health, libraries, playgrounds, cooking and sewing.

Only one decade from their foundation, there were already 400 established Institutes. Between 1910 and 1930, they expanded rapidly as members travelled to other rural regions to teach short courses in home economics, with attendees leaving inspired to establish their own Institute. Notably, Women’s Institutes were active fundraisers during the First and Second World Wars and were also keen to be involved in their local school boards. During the Depression years of the 1930s there was a dip in membership, but the institutes continued on with their work and soon took on new projects. 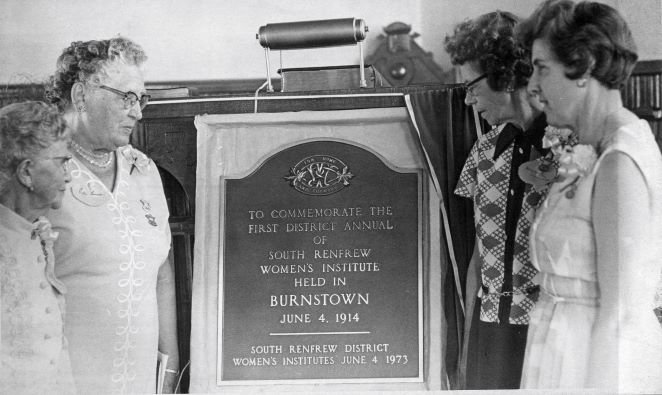 WI members gather around a plaque in 1973 to commemorate the first meeting of the South Renfrew District Women's Institute. [1996-0075 P0675]

Most notably, in the mid-1940s, a campaign was launched to encourage branches to prepare a history of their local community in time for the 50th anniversary of Women’s Institutes. These carefully researched and compiled local history books would become the Tweedsmuirs!

Individual branches of the Women’s Institutes created their own Tweedsmuir Community History Books (commonly known as Tweedsmuirs). These are scrapbooks and/or printed volumes that capture and preserve local community history, including the histories of the earliest European settlers, churches, schools and local institutions, notes on local farming and industry practices, and lots of photographs and information on people and places of interest. Over time, these books have grown to be widely consulted authorities on the history of rural Ontario.

Today, many of the Tweedsmuirs can be accessed digitally by visiting the website of the Federated Women's Institutes of Ontario (FWIO): https://collections.fwio.on.ca/search 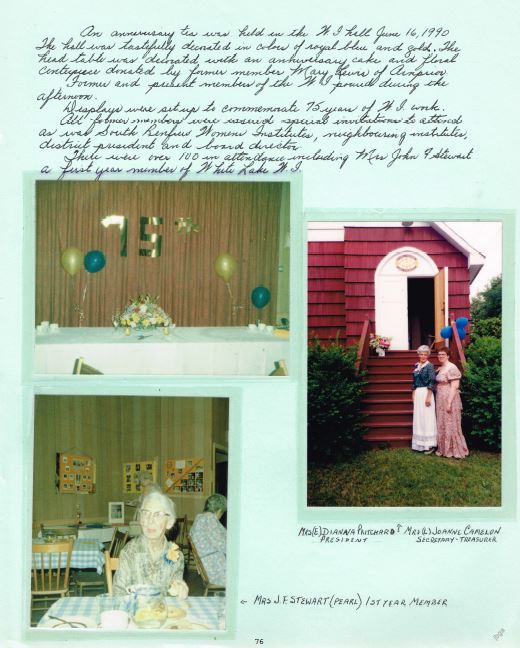 At one time, Renfrew South District had over 20 branches. As of 2022, 6 branches remain. The District forms part of the larger Eastern Area, which then forms part of the Federated Women’s Institutes of Ontario (FWIO). The FWIO joins with the other provinces to form the Federated Women’s Institutes of Canada (FWIC). All are part of the Associated Country Women of the World (ACWW). The ACWW, a non-governmental organization, is the largest rural organization of women in the world and has consultative status with the UN and its agencies.

Before even the Renfrew South District was established in 1913, the first branch was formed in Burnstown on 11 January 1911. The first meeting of the Burnstown Women’s Institute was held at the home of Mrs. Forrest in February, and Mrs. J.G. Blane was the appointed President. The branch’s minute books reveal that they decided to discuss the preparation of eggs and poultry at their next meeting in March and that when a suggestion of card games for entertainment was made, it was rejected “on account of the evils to which it led”.

Many meetings of the branches were held in the homes of members, who took turns hosting. However, some branches also found themselves using church and community halls, as well as schoolhouses. The White Lake Women’s Institute, formed on 21 June 1915, is the only branch in the district with its own hall that is still in use today. 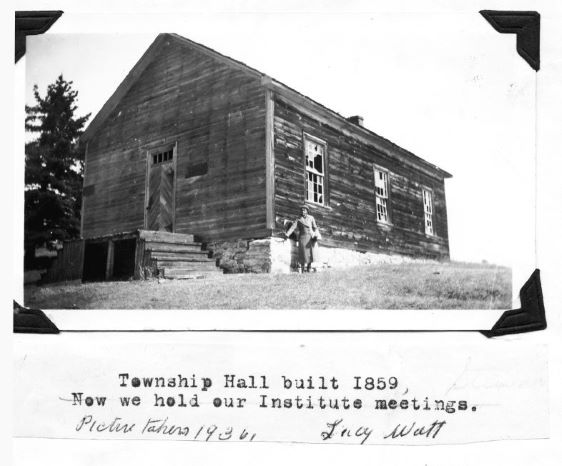 One of the most recently digitized Tweedsmuirs from Renfrew South District are those from the Goshen Women's Institute: https://collections.fwio.on.ca/3201163/data?n=5

Goshen was established by Scottish settlers in the mid-19th century. As the story goes, members of the McDermid, McMullens and Campbell families were living at another settlement by Shaw Lake but were looking for better lands. They had to ask the head of the Shaw Lake settlement, Mr Campbell, to leave and as they departed, he told them:  "I suppose you think you will have no more trouble when you get to the land of Goshen!" -- referring to the biblical place given in Egypt to the Hebrews by the pharaoh of Joseph. And thus the families who departed had a new name for their settlement! Other families soon joined, like the Millers, the McInnis' and the Cooks. (Goshen WI Tweedsmuir Community History, Volume 1, p. 11) 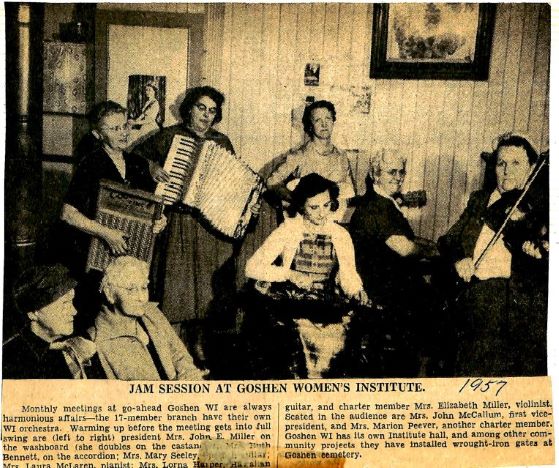 Goshen WI was organized on September 17, 1914, by Mrs. Stringer of Burnstown and Miss McLachlin of White Lake. Meetings took place in members' homes until the branch purchased a small log building from the Sons of Temperance to use as their meeting hall in 1925. Goshen WI supported the community through its volunteer work and donations to local clubs and organizations including the Renfrew Victoria Hospital. There is a cairn at the hamlet corner erected by the branch to commemorate the once-thriving Goshen Community. The branch disbanded on 25 April 1994.

The Arnprior & McNab/Braeside Archives (AMBA) holds a collection of Tweedsmuirs and other organizational records for various WI branches. These branches are part of the larger Renfrew South District, with the exception of a few from West Carleton District, such as Galetta, Lorne Sutherland and Johnston May.

Full descriptions of the AMBA’s holdings of Women’s Institute records are available on our website. A consolidated list is below.

While many WI branches have disbanded, some are still going strong. The Burnstown Women’s Institute, for example, still meets monthly, has a community walking group on Mondays, and a craft drop-in on Wednesdays. They continue to have varied interesting monthly programs, with last month’s topic being Companion Planting for Gardens.  At the provincial level, the current advocacy programs are improving the diagnosis and treatment of Lyme’s Disease, reinstating Lifestyle Programs at school, and the awareness and prevention of Human Trafficking.

If you are interested in joining a Branch, check out the ‘Find a Branch’ on their website for a branch near you!

This blog is indebted to the work of the volunteers and to AMBA's previous archivists, who compiled and made available information about the WI collections, as well as the information provided by the Women's Institute members themselves and the FWIO website.