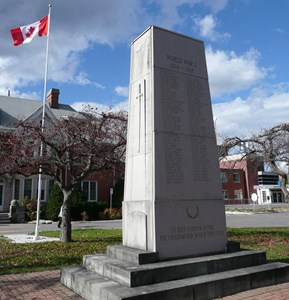 There are seventy-six First World War, eighty four Second World War and one Korean War names inscribed on the town of Arnprior’s cenotaph. Each person has a story that is dear to their families and friends, and for local residents, their loss and absence was felt for years. The Arnprior Cenotaph stands in remembrance for those men who fought and died during these wars; it was first raised in 1952, and then later altered and restored in 1998.

Before 1952, there had been a wooden pillar without any inscribed names, which had been considered as a town memorial. Though many names were also inscribed in local halls, churches, books of remembrance, as well as on honour rolls at local businesses, an editorial for the Arnprior Chronicle on 29 November 1951 by B. V. Bedore lamented that there was no public memorial by which to remember their sacrifice: 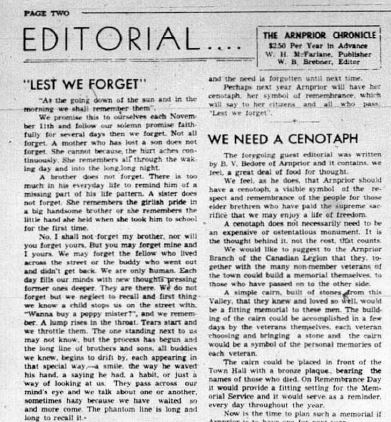 No, I shall not forget my brother, nor will you forget yours. But you may forget mine and I yours. We may forget the fellow who lived across the street or the buddy who went out and didn't get back... The phantom line is long and long to recall it... Arnprior will have her cenoptah, her symbol of remembrance, which will say to her citizens and all who pass 'Lest we forget'.

Soon after, with the support of local residents, the Arnprior Branch of the Canadian Legion formed the Cenotaph Committee. Made up of several veterans of both the First and Second World Wars, the committee was chaired by J. J. Greene, and also received the support of Mayor Robert Simpson and local Women's Institutes. The committee set out to collect the names and necessary funding for a cenotaph, and to also secure a location for the construction of the memorial. There was some debate whether it should be in a public park or outside the hospital – the latter was finally selected.

The cenotaph was finished just in time for Remembrance Day on 11 November 1952. One  speaker stated that the Cenotaph was to not only stand as a memorial to those who had died, but to further stand as a reminder of all those still living who fought in the wars and bore the marks of battle on their bodies and in their minds [The Arnprior Chronicle, 13 November 1952]. The following year, it was officially unveiled at a larger function by the Honourable Brooke Claxton, then Minister of National Defence, at which time the name of Desmond Trudeau was added after he passed away in Korea, 1953.

Work to collect the names was the most painstaking of tasks, and the committee finalized a list of 140 men in 1952. Yet, some names of local residents who died during the wars were still missing and errors were made.

Private Celesta James Lavallee, born 22 September 1897 in Glasgow Station, Ontario, was only 18, single and working as a farmer, when he enlisted in the army just after Christmas on 28 December 1915. His parents had both passed away by this time, but he had several siblings still living in the region. He left Canada only a few months later aboard the SS Baltic for England, where he was transferred to the Canadian Infantry (Manitoba Regiment) 44th Battalion and was sent to Havre, France in late summer of 1916. He wrote to his sister, Mrs J. S. Saunders (born Violet Edith Lavallee) in Admaston from France, 8 December 1916:

They tell us it is going to be very quiet where we are going in this time. It will be a good rest compared to what we have had. We left a lot of good fellows behind… We can just hear the guns but are out of range. It is pleasant to be able to lie down and sleep in peace… [Published in the Renfrew Mercury, 8 December 1916]

Lavallee was killed in action west of Vimy on 10 April 1917, and his body was never recovered. His name is engraved on the Vimy Ridge Memorial in France. He was commemorated on the 1952 Arnprior Cenotaph, but erroneously as a casualty of the Second World War.

When restorations to the Cenotaph became necessary in the late 1990s, there was a call to further identify those whose names had been missed by the first committee and to correct any errors made. In 1998, with assistance from volunteers of the Arnprior & McNab/Braeside Archives, several were added and others corrected, but the name of Celeste Lavallee was removed.

Though a great deal of research had been done in 1952 and 1998, there was still some confusion over Lavallee’s name and service record, as he had first been included on the 1952 cenotaph under the list of names for the Second World War. However, numerous sources now show that he had fought in the First World War, and corrections have since been made to the Arnprior Legion’s private memorial.

Today, it is the hope of the Archives that along with the Arnprior Cenotaph and other local memorials, that our new digital War Memorial will serve as a reminder of the service and sacrifice of men such as Lavallee. Completed in 2021, the Arnprior Cenotaph Special Research Project aimed to collect all of the names of those inscribed on the cenotaph, honour rolls and other local memorials. In addition to Lavallee, 15 other forgotten soldiers are remembered in the Archives. The project gathered together information about their service records and their lives, as a research tool for visitors to the Archives. You can learn more about the project by visiting the War Memorial page on our website or by contacting the Archives. 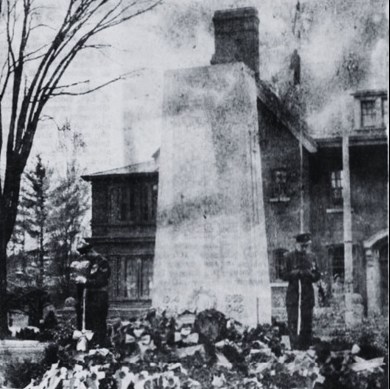