The people of the Algonquin First Nation lived and hunted in the Ottawa Valley for thousands of years prior to the arrival of European settlers. They never entered into a formal treaty with the Crown and never ceded the land upon which McNab township now stands. Please see links to further information at the bottom of this page.

The earliest European squatters in McNab Township settled on government land with the intention of acquiring legal title before the Township was surveyed in the early 1820's. Eight of these settlers signed a bond with Chief Archibald McNab in Montreal in July 1825, years after they had started to work the land. They were Duncan Anderson, Duncan Campbell, Alexander Goodwin, Charles Goodwin, Alexander McDonnell, James McNee, Archibald Stewart, and John Taylor. They joined the group of 84 people who Chief McNab brought here in 1825 under a private immigration scheme. This undertaking was similar to those which brought other Scottish families to Perth and Johnstown District of Upper Canada in 1820-1821 through various emigration societies based in Glasgow. Unlike those settlers, the families bound for McNab Township signed an untenable agreement with the Laird to pay back the cost of their passage and an annual quit-rent in the form of a bushel of wheat or equivalent in flour for each cleared acre. They had no way of knowing that McNab did not actually own the land and that it would be almost impossible to meet their obligations under the agreement due to the harsh conditions of the land and the climate in Upper Canada.

Later settlers to McNab Township include a substantial German population who immigrated from the eastern provinces of Prussia from the late 1850's - 1900. Many of these families settled in Clay Valley (formerly called German Settlement), Clay Bank and Mansfield. As the name for this area suggests, the soil is clay based which is relatively fertile because of the capacity of the soil to absorb important plant nutrients. Today, this area of the Township is farmed extensively.

Private letters that survive from the early 1800’s offer intimate details of how settlers coped with the challenges of daily life. In a typically Canadian way, an early settler by the name of Alexander Stewart began a letter to his brother in Edinburgh by telling him about the weather here, "the winter is long and cold in this country but it is far more pleasant than it is in Scotland for there is no rain here in the winter time but keen frost the most of the time between the 20th of Nov. till the beginning of March or a little after, it, at least it was the case this last winter and the snow is not entirely away yet this being the middle of April..."  He also advised that they bring potatoes and herring and a pint or two of good whiskey as provisions for the journey from Scotland. Alexander Stewart was a shoe maker who settled on Lot 12 of the 7th Concession. The complete letter which was written with homemade ink is shown at right (see Looking Back ) with the transcription provided in the link below.

The following letter, by an unidentified writer was published in "Chamber’s Edinburgh Journal" in 1833. As the introduction states it gives "a graphic description of the trials which the early settlers endured during the regime of the "Old Chief." The letter was most likely written by Andrew Russell to his mother. Andrew Russell and his wife Isabella with their three children left Scotland in May 1832 and arrived in McNab Township in October 1832. The location of the farm would be lot 14, Concession 12 (near present day Braeside).

Kruzich, Noreen. The Ancestors are Arranging Things: A Journey on the Algonquin Trail. Canada: Borealis Press, 2011. 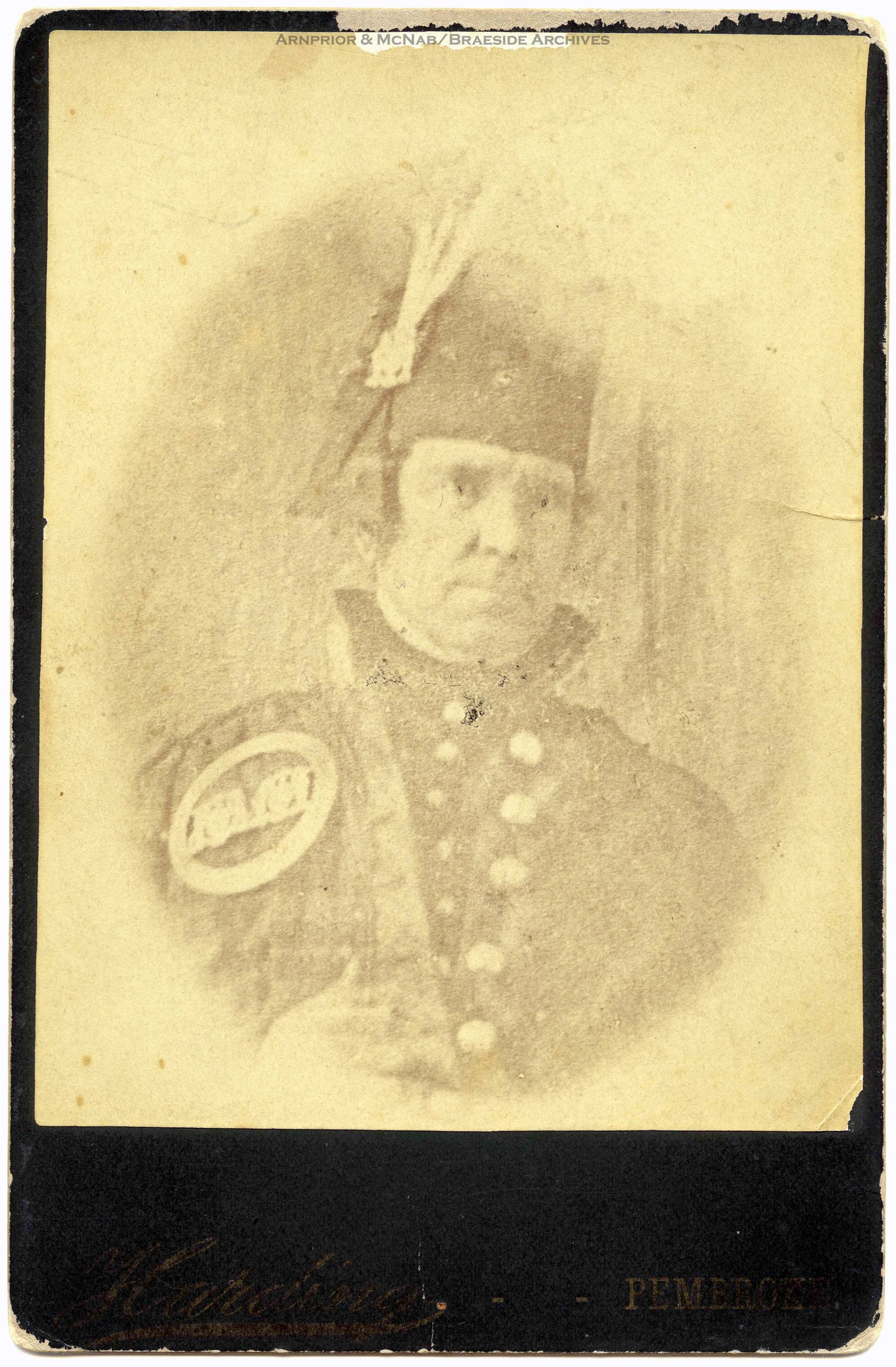 A rare cabinet portrait of Chief Archibald McNab by Harding of Pembroke, Ontario.

For further reading about immigration and the development of the Township please refer to ‘McNab – The Township’ by Peter Hessel.

The Dictionary of Canadian Biography entry for McNab, Archibald, 17th Chief of Clan MACNAB gives a comprehensive account of his life. 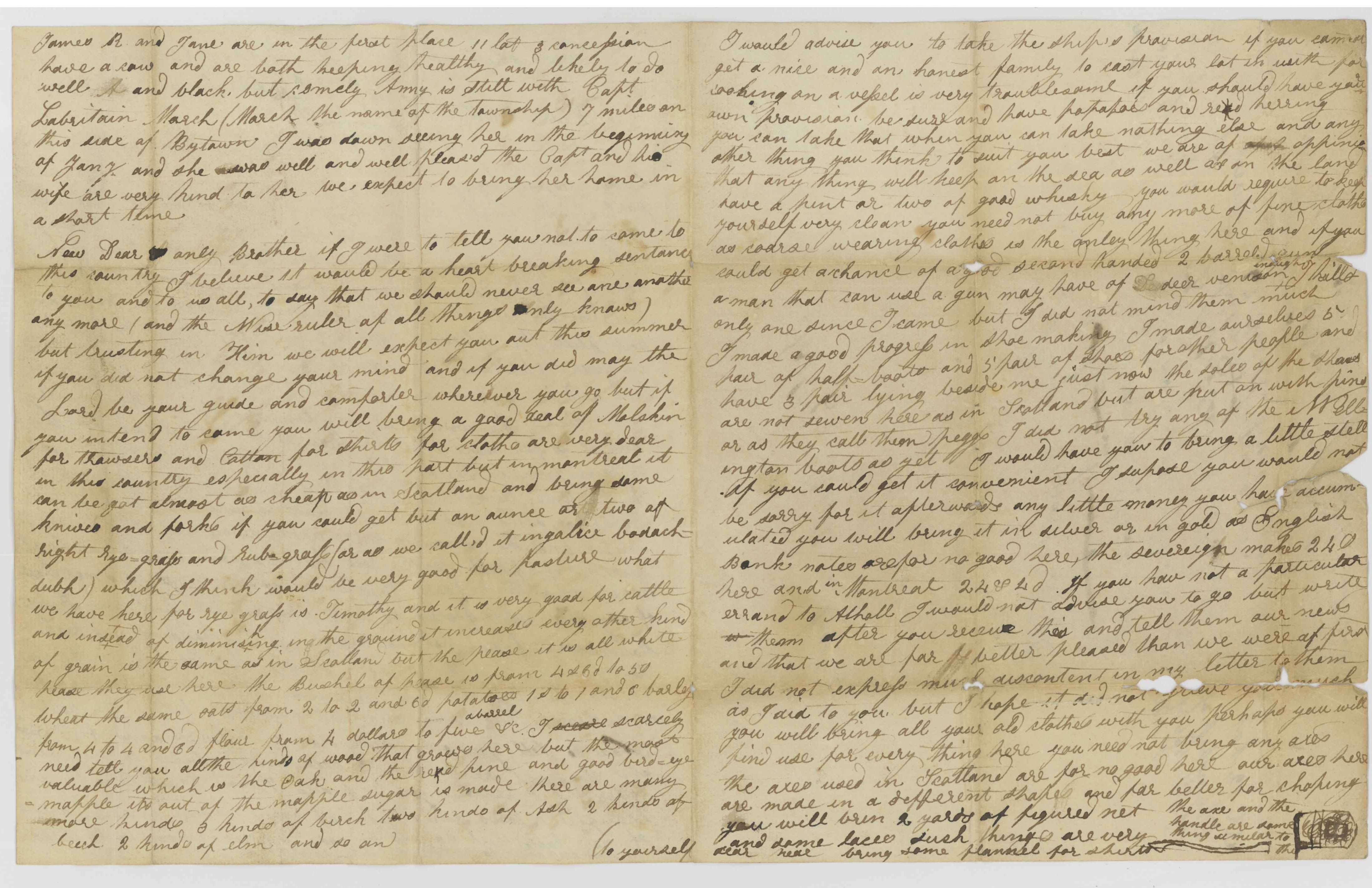 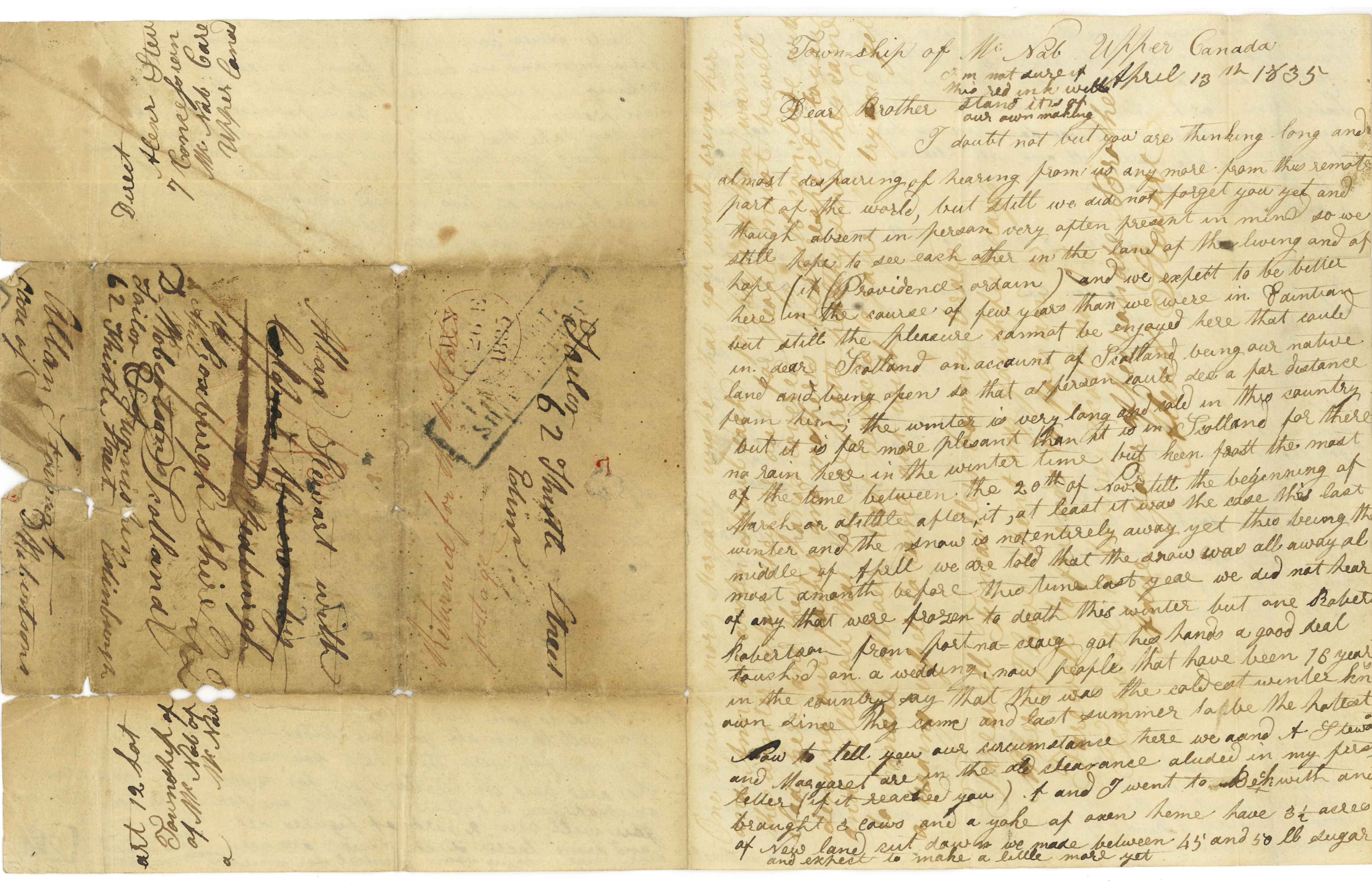 Note that the address was written on the back of the letter itself. The letter was returned to the sender because of insufficient postage. 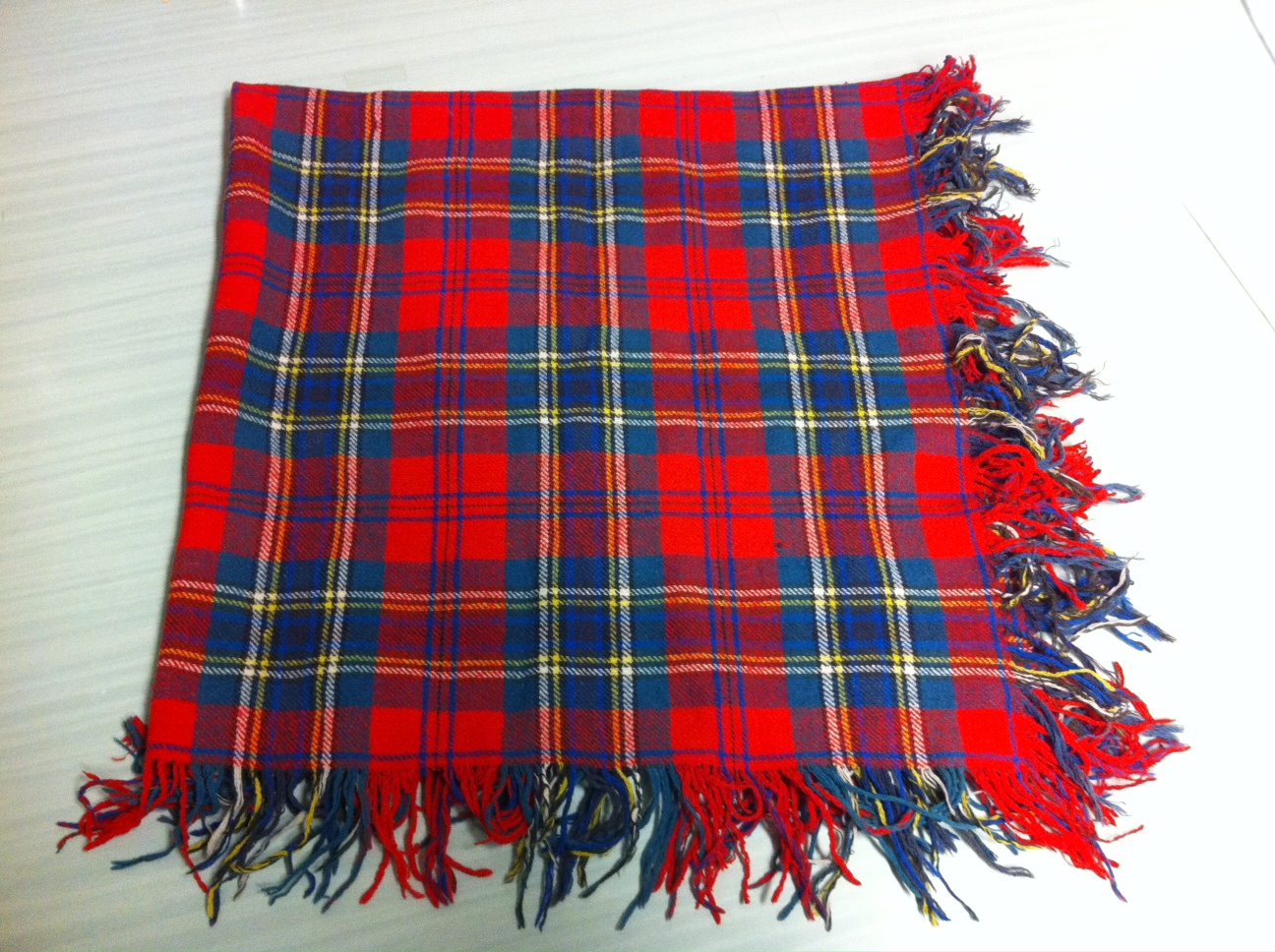 Mrs. Christian Campbell's tartan shawl was brought to McNab Township in 1825. It is carefully preserved as a family heirloom by the Robert Campbell family. 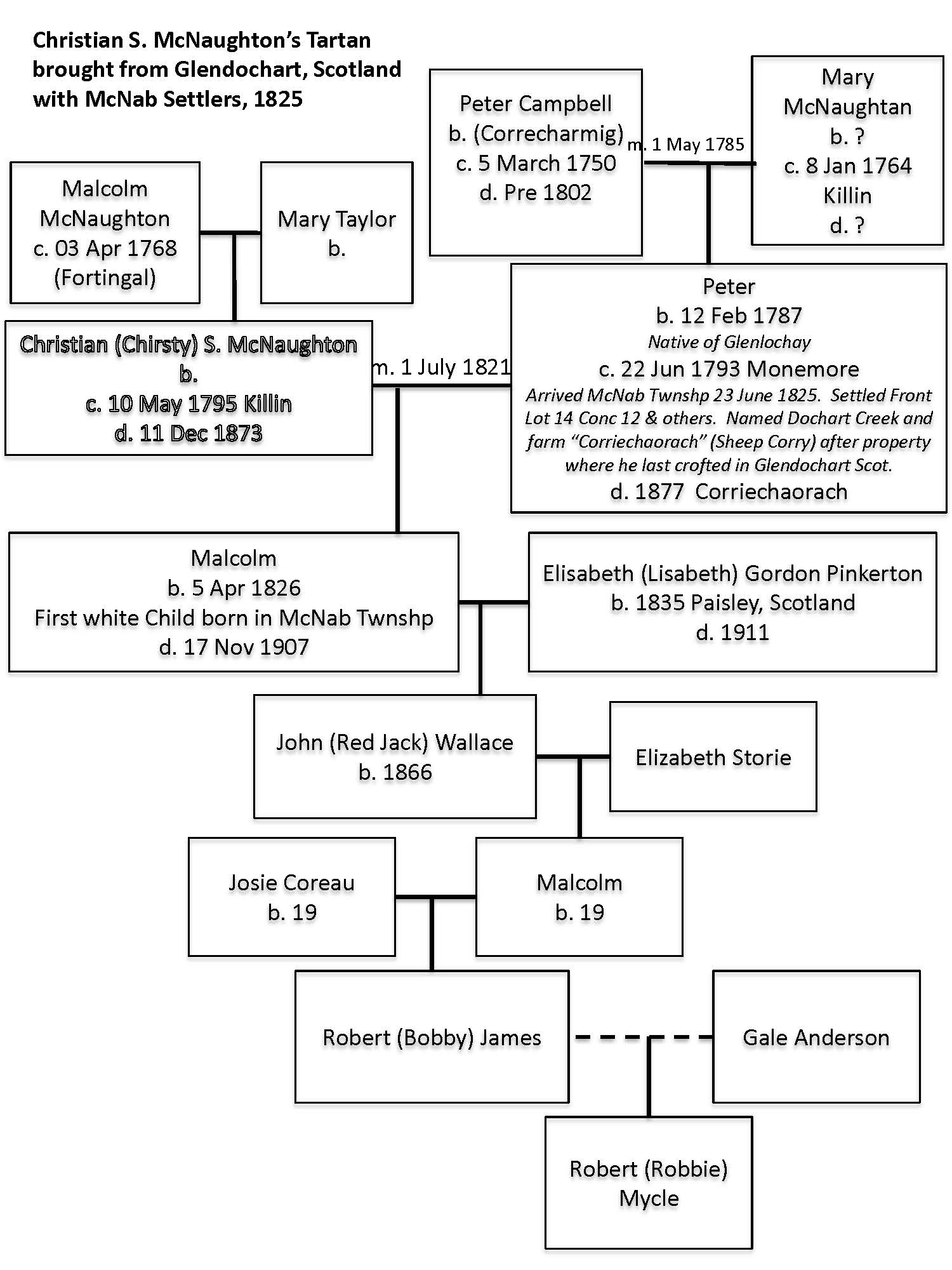 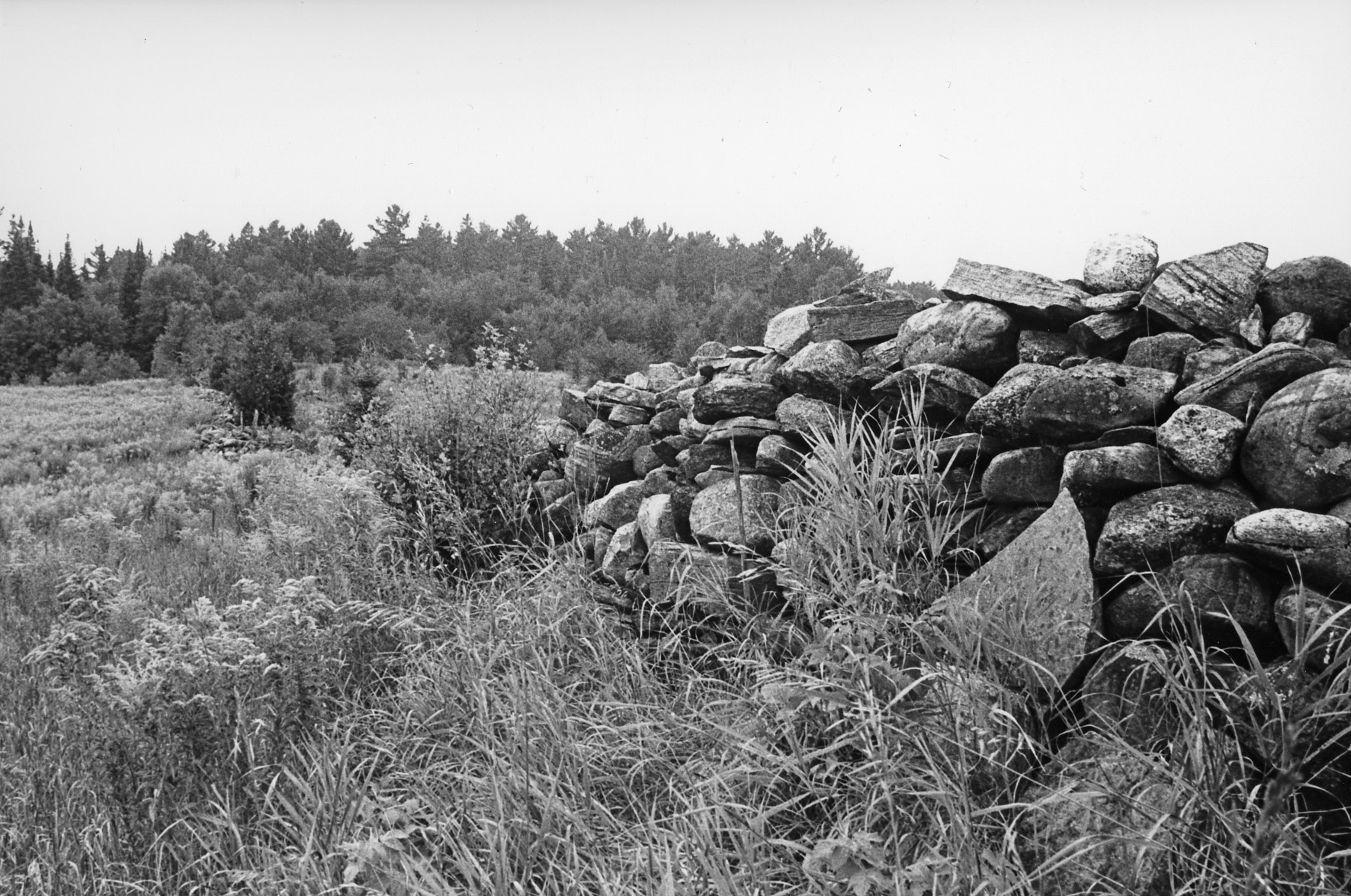 This stone fence represents hours of hard manual work for the settlers who needed to clear and possibly drain the land for crops. As stated in 'Destination: Ottawa Valley' by Peter Hessel, "the reality was that the new immigrant would not be able to make a living on his land until he put in many years of back-breaking labour, clearing the bush, removing stumps and heavy rocks (these were gathered into stone fences which can still be seen alongside fields and in areas long abandoned as farmland).