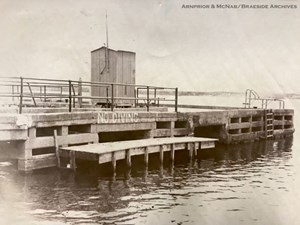 In view of the recently released Waterfront Master Plan by the Town of Arnprior, I thought that a brief overview of the history of Robert Simpson Park would be a welcome topic. Whenever I visit the Park, I’m impressed by the sweeping beauty of the site which overlooks the Ottawa River at the mouth of the Madawaska River. When I began my research, I made certain assumptions about the Park but now I have a much better understanding of how the Park was created, developed and maintained over the last 130 years. You may surprised to learn that we once had a commercial vineyard and fruit orchard in Arnprior! 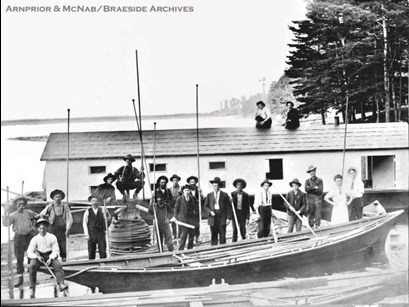 In the early 1820s, the Laird of McNab and his Scottish settlers transformed the waterfront, when he built his first house on the present day site of the Galilee Centre. It is likely that a wharf and warehouse were also built on the shore below, to store the implements and provisions for the settlers, but no evidence of its presence exists. Thus, our story begins when another man, Daniel McLachlin, a successful lumberman working at the Chaudiere Falls, purchased over 400 acres at Arnprior in 1851.

McLachlin’s enterprise reshaped Arnprior from an abandoned mill site to a thriving Village within ten years. He built an L shaped wharf mid-way between John Street and the mouth of the Madawaska River, which appears on the 1854 Plan of Arnprior by Surveyor John Snow. A later plan, dated 1871, clearly identifies the same structure shown on the earlier map as a Steamboat Wharf. In April of 1867, McLachlin placed an interesting notice to ‘Madawaska Lumberman’ in the Ottawa Daily Citizen, “It was not my intention to allow the use of the road to the Beach or the privilege of camping in the neighborhood, as I require the road and ground for other purposes.” Presumably, he was using the beach for his own logging operations and landing area for steamboats which carried both passengers and supplies to Arnprior. 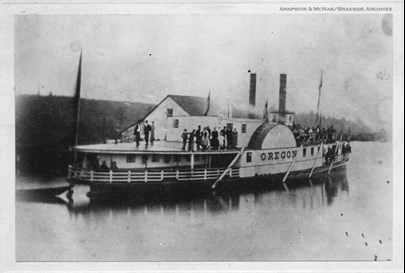 A rare photograph of the Oregon steamer, possibly taken at its launch by the Union Forwarding and Railway Company in 1846. It operated between Union Village, at the head of Chats Falls, and Arnprior. [2015-0349 Norman B. Gillies fonds]

In May 1875, a lease was drawn up which permitted, John Thompson, a wharfinger (an owner or keeper of a wharf), to erect a second wharf at the foot of John Street. He was directed by the Reeve to charge specific rates for wharfage and storage, which provided revenue for the Village. Travelling by steamer from above Chat’s Falls to Cheneaux was the best form of transportation from the 1840s to the late 1870s. One of the earliest steamers to operate above Chats Falls was the George Buchanan, which was built and launched from Arnprior, in 1836.

Edgewood house and the grounds stretched from Usborne Street (once parallel to Ewen, it no longer exists) to the Beach. Adapted by D. Forsyth from Canadian Illustrated News Vol. XVIII No. 20 Image No. 68407

Daniel McLachlin’s daughter Jessie married John Usborne, son of merchant George Usborne of Portage-du-Fort in 1871. Two years later, they began construction of a large Victorian house at the top of the hill on the east side of John Street which they named Edgewood (for more information about Edgewood House, click here). Usborne, as Managing Director of the Renfrew Fruit and Floral Company, advocated planting regional varieties of fruit trees to local farmers. He planted a large vineyard, several varieties of fruit trees and extensive flower gardens throughout the area that now forms Robert Simpson Park. A wind-mill pump forced water from the Chats Lake up to a huge vat hidden under the mature pine trees at the top of the hill, which then gravity-fed water throughout the property. His large fish pond and fountains beside his house must have been a novelty in Arnprior in the early 1880s. John and Jessie left Arnprior between 1888-1891, when John found a different calling as an Anglican priest in Toronto and later in Honolulu, Hawaii. 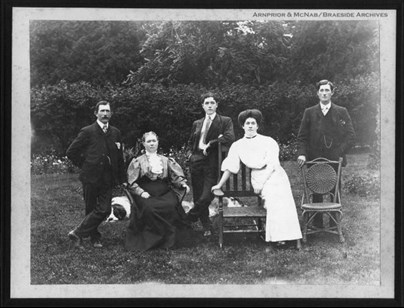 Edgewood Head Gardener Charles Hornidge (far left) with his wife Cecilia, and sons Frederick and William, circa 1900. Hester Hornidge (white dress) worked as a Governess for the Usborne children in the 1880s. [2005-0179 Linda Chandler fonds]

The Town of Arnprior purchased the abandoned Edgewood from descendants of Daniel McLachlin in 1938. Municipal leaders at the time stressed that the park they envisioned was intended for use as a residential park and would not be used as a campsite by tourists. Mayor Alexander Reid stated, “I feel if we take this step, the people will look back at the 1938 council with the thought that they really accomplished something for the benefit of the Town.” While the Park was under the jurisdiction of the Town Council, a Committee was formed of community members interested in the care and upkeep of the Park. The Committee asked the Agricultural Society for suggestions about how to beautify the property and hired Charles Hornidge, former gardener for the Usborne’s, to be the Park Supervisor. When work began to clean up the park in 1938, the crew discovered several pools and underground pipes leftover from the gardens of Usborne’s Renfrew Fruit & Floral Company. 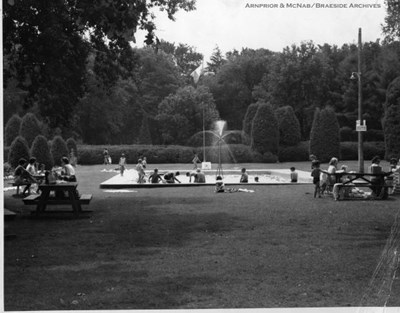 The period between the late 1940s and the 1960s was a time of renewal and development for the Park. The Lion’s Club of Arnprior built two new bathing houses beside the wharf to replace older ones that had rotted over time. Other improvements also included a wading pool, clipped cedar hedges and dozens of flower beds in the formal style commonly adopted for civic spaces at that time. Biggs Jack was the caretaker of the Park in the 1950s when much of the restoration work took place. In 1966, a lift gate was set up across the road at the entrance to the park to stop people from speeding up and down the steep hill to the beach. Here, every out-of-town car was charged ten cents. Two years later, it was decided to charge an entrance fee of $1.00 per car on Sundays and holidays. A total of $328.00 was collected that year. I am not sure how long the lift-gate remained in place but it was probably removed in the early 1970s. 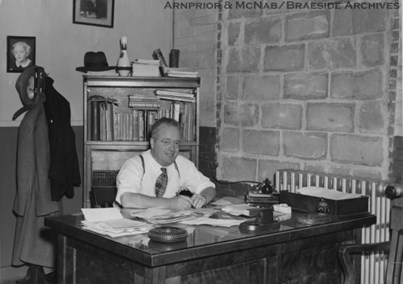 The 10 acre park has been called by several different names over the years: Edgewood, McLachlin Municipal Park, the Municipal Park or The Town Park. In 1976, to honour “Bob” Simpson’s 16 years as Mayor and his many successes in bringing new industries to the Town, the park was named Robert Simpson Park in his honour. 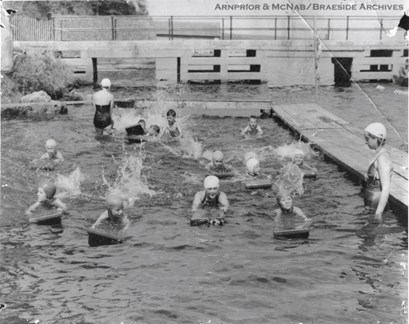 Improvements to the park continued over the next decades, while some things changed, others remained the same. Children continued to enjoy jumping off the wharf, which had been situated at the foot of John Street, since 1876. Eventually, the Town offered swimming lessons there and lifeguards supervised the beach throughout the summer. Special events such as the pointer boat races ‘Salute to the Valley’, and Canada Day celebrations, drew huge crowds. By the 1980s the wharf had deteriorated so badly that the federal Dept. of Oceans and Fisheries wanted it completely removed. It estimated that it would cost $235,000 to repair. Mayor Tom Sullivan pointed out its historical significance as a landmark and its importance as a tourist attraction. He was successful in convincing the Federal government to preserve a portion of it. In 1988, the old wharf was shortened but it still provided a breakwater for the beach area. However, the wharf continued to deteriorate until it had to be demolished about ten years later. 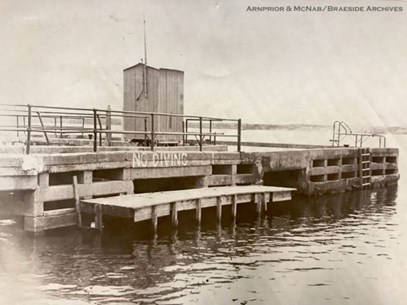 When I asked Ron Warburton (an engineer who participated in the Waterfront Master Plan consultation process) about the importance of a breakwater he replied that, “One of the things that the old wharf did was to act like a breakwater and slow the sediment down from the downstream flow of the river. This created a beach right in behind it and thus the Arnprior beach was created. However when they removed the wharf, a lot of the beach sand washed away and now the Town adds sand to the beach every year in the area closer to the Madawaska River.” 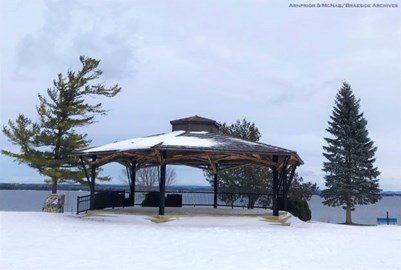 In 1938 the Citizen’s Band of Arnprior erected a band stand to provide musical entertainment to visitors in the Park. The Lions Club built the Pavilion in the same area for the same purpose in 1996.

In 1997, a joint project between the Recreation Dept. and the Optimist Club to install a play structure was undertaken at a cost $13,000.  In July of that year, the Arnprior Civitan Club built a large, decorative fountain. Over the last 25 years, the park has not changed dramatically. A concession stand and new public washrooms were built to accommodate residents of the Town and an increased number of visitors to the Park from Ottawa. The Gillies Trail, created as part of the Millennium Trails project by various community groups, linked the Beach to the Marina and Gillies Grove. The Prior Chest Nuts Cancer Survivor Team planted several trees in the Park in 2016. They will provide welcome shade and erosion protection in years to come.  A popular series of free concerts in the Park have taken place on Sunday afternoons in recent years.

In 2021, the Town erected a barrier that prevented cars from reaching the parking area at the beach. After receiving complaints from the public, council decided to remove it and once again allow free access to the beach by vehicles. In 1938, Max Smolkin (Chairman of the Park Committee), felt that “the town could build, at a moderate cost, a municipal park that would be a credit to the district and a source of pleasure and happiness to Citizens, as well as the envy of other municipalities.” Mr. Smolkin would be happy to know that the residents of Arnprior care as deeply about the future of the Park now, as they did then.

To learn about future development of the Park visit https://arnpriorwaterfront.ca/

I am grateful to Rob Warburton for his insight into the importance of breakwaters and AMBA volunteers, John Fisher and Dave Forsyth, for their research on Usborne and the Renfrew Fruit and Floral Company.