The Handford Studio Collection is one of the largest collections in the AMBA storage room, the Vault. It contains some 11,418 glass plate negatives, 8,085 cellulose negatives, 1500 nitrate negatives (digitized) and 655 prints. These range in date from 1895 up to 1975.

Handford Photography Studio belonged to Samuel Augustus “Gus” Lewis Handford, otherwise known as A. L Handford. Gus, as he seems to have been affectionately called, was born in Huron County, Ontario on 29 August 1872. His father, Silas Handford (1843-1919) and his mother, Elizabeth “Lizzie” Ann Lewis (1841-1929), were both born in England, but appear to have met and married in Huron County. Gus was the eldest boy of eight children in the Handford family. 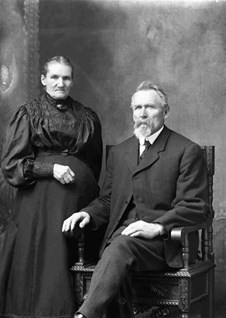 Gus Handford began his career as an apprentice photographer to Mr. Joe Senior of Exeter, Ontario. He was paid 25 cents a week to clean up the studio. At the age of 16, he moved to London, Ontario, and worked for another photographer for two years before he moved to Ottawa to train with George A. Snider. Snider operated a studio on Bank Street but also had a branch in Renfrew in 1895. When the collection was deposited in the Archives, his grandson noted that Gus had also worked for Robert Sim who operated a studio in Renfrew from 1870 to 1914.

While in Ottawa, Gus met Grace Edith Young (1873-1927), daughter of Catherine and James A. Young of Sand Point, who was attending the Conservatory of Music. Upon her graduation in 1894, Grace returned to Sand Point and Gus followed. He soon set up his own photographic business and the couple were married, on 17 August 1896. 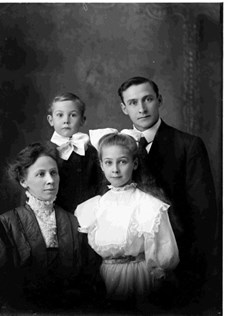 Gus Handford started operating his photographic business in the McAndrew building in downtown Renfrew. Various sources list 1895 as the date it was established, but a business card held by the Handford family reads "established 1893".

By 1903, construction of a substantial brick building at the corner of Raglan and Plaunt Street had commenced, and the building later became known as Handford Block. The studio contained large showrooms with 12-foot ceilings and a studio on one side of the ground floor. On the other side of the storefront, J. M. Ferguson rented a space for a "Ladies Emporium" from 1905 to 1907. Lindsay's Ottawa Music Company occupied the additional storefront from 1909 to 1915. At this time, a peaked glass roof was constructed to provide light for the photographic studio below. 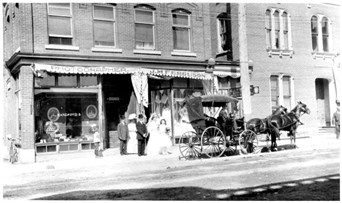 The Handford family were long-term residents of Renfrew. Between 1903 and 1915, they lived on the second floor of the Handford Block building, before they moved to a larger home at Raglan Street south, almost directly behind the Agricultural Society's Fair Grounds in Renfrew. 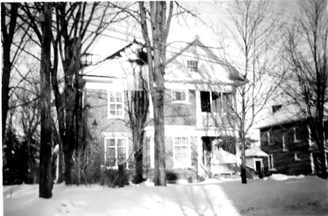 Mrs. Handford took over the business when her husband went hunting each fall. Gus also served on the Renfrew town council, was a member of the Rotary Club and a long-term member of the Marion Lodge of the International Order of Odd Fellows. He liked to camp at Sand Bay on the Ottawa River with his family and enjoyed recreational sports, like cycling around the countryside.

While out and about in Renfrew, Gus often used a Graflex camera with roll film to capture scenes and places of the surrounding region. He sold many of these as postcards in the family’s shop, alongside frames, records, paintings and some appliances in the early years. 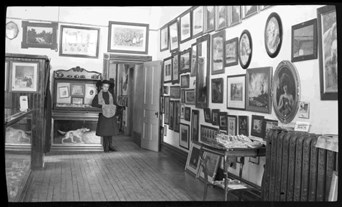 Lillian Handford in the interior of the Handford Store in Renfrew on Raglan St. The walls show many framed paintings and/or photographs, c. 1925 [2008-0233 Series 9.2]

The Handford Studio collection is made up of people and places not just from Renfrew, but also from surrounding areas, including Arnprior, McNab-Braeside, Calabogie, Cobden, Beachburg and more. People often came from miles around to have their photographs captured!

"Gus Handford was excellent when it came to photographing children. He could always make them smile. This was in the day of slow focusing - no fast film then - but he was able to capture their attention with a rattle of by jingling his keys."

For a time, there was an Arnprior branch of the Hanford Studio between 1920 and 1923. Gus opened it with his brother Wilber Wilton Handford (1880-1942), and the business was known as the 'Handford Bros. Studio'. 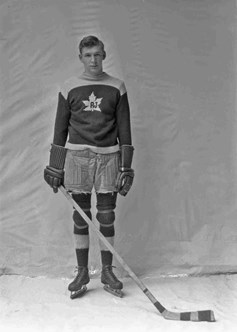 Throughout the years, Gus captured countless people in portraits, including the Renfrew Collegiate teams and graduation classes. 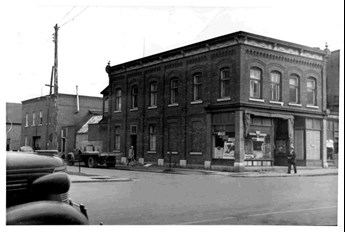 The Handford Block in the 1930s photo by A. L. Handford. Shows fan lighting for photo gallery. The square brick building at back was built by A.L. Handford - the first contractor was Mr. M.J. Supher built-in Renfrew - ground floor - a garage; second floor - three apartments. [2008-0233]

And many people worked for the Studio over the years, including the longest-serving member of staff, Miss Thelma Stringer, who was there from the 1930s to 1973. Other long-term employees included Mr. Cook, Mr. Paul, Lilley Splane and Eva Splane. 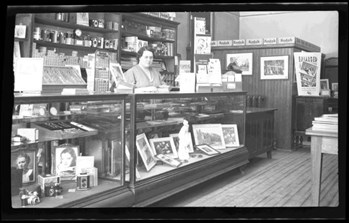 Gus Handford passed away in 1949. Grace had passed many years prior in 1927. Their daughter, Lillian, helped out in the studio after her father’s death and went on to teach physical education in Renfrew. Their sons, Edward and Herbert, had both studied to be doctors and married in 1932 and 1945 respectively. They worked for the Renfrew Victoria Hospital and opened a medical practice in Renfrew, which was in operation until the 1980s. 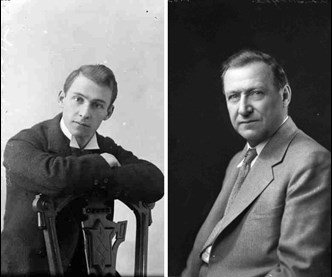 It was Edward Handford Jr. (grandson of Gus and son of Edward) who took over the family photography business from 1955 to 1975. Like his grandfather, he sold Kodak cameras and was very busy photographing and processing weddings throughout the 1960s and early 1970s. The business was closed in the mid-1970s when he moved to Ottawa. 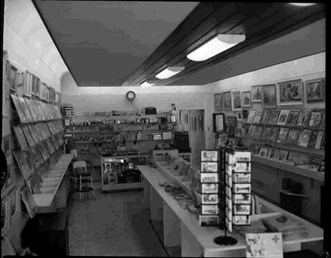 The Handford Studio collection was deposited in the Arnprior McNab/Braeside Archives, 8 May 2008. In 2012, a further donation to the collection of approximately 100 negatives and 50 prints (Series 9) was made by members of the Handford family.

Numerous hours were spent to stabilize and process the collection by the archivist and volunteers of the Archives at the time. Volunteers not only arranged and preserved the material but also helped to produce indexes listing each individual item. For the indexing, they used the client identifications often written on the edges of the glass plate negatives, as well as some handwritten indexes originally produced by the Studio. Today, you can find many of the photographs and all of the indexes online. Aside from the nitrate photographs that were immediately digitized due to the dangers posed by nitrate film, the photographs of the Handford Collection are only digitized when requested by users. Names appear to have been spelled phonetically, and so, we encourage anyone searching the collection to look up alternate spellings!

A portion of the Handford Studio collection was also acquired by Library and Archives Canada in the 1970s from the family – see Augustus L. Handford Collection, accession 1970-249. Additional information may also be found at Heritage Renfrew.

This blog is indebted to the work of the volunteers and to AMBA's previous archivists, who compiled and made available information about the collection online, as well as the information provided by donors from the Handford family and recorded when the collection was first brought to the Archives. Stories about and by the Handfords can also be found in Carol Bennett's "The Story of Renfrew: Heritage Renfrew," (Renfrew: Juniper Books, 1984).

Inside the Vault: Women's Institute Coll… Behind the Archives' Door: The Newspaper…

Home> Blog> Inside the Vault: The Handford Studio Collection